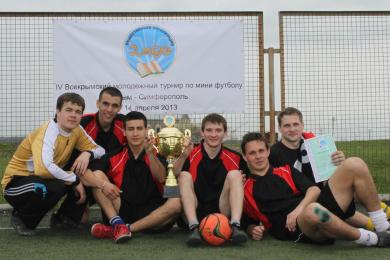 The Social Organisation “Emel” is continuing the effort on popularizing sports and health way of life among the Crimean youth. “Emel” activists, remembering the saying of the Prophet Muhammad (may be peace and blessings upon him) that a strong believer is better before Allah and more loved by Him than a weak believer, although the good is in each (of them), have been urging the youth to go in for sports and strengthen their physical condition.

It was last weekend that Simferopol hosted the 4th Republican tournament on mini-football on “Emel” cup, with sixteen participating teams from various Crimean regions: Simferopol, Bahchisaray, Gvardeyskoye settlement and Krasnogvardeysky district. Participants were university teams, teams from Social Organisations and groups of young people. This contest bit the record by the participants’ number.

Level of competitions is up year by year

According to Mr.Muslim Dervishev, “Emel” chairman, the level of competitions has been up year by year, which is proved by the increasing numbers of participating teams. Also, he pledges that “Emel” is planning to organize an analogous event in future.

Note that “Emel” hosts the annual contest on chess and table tennis, to popularize sports among Crimean youth.