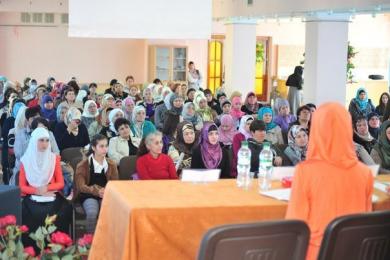 Children are a greatest mercy granted to us by the Most High. Will we be able to protect from harm not only the bodies of the jewelries that we entrusted but their morals and purity of soul? This issue has been relevant and important in all the times.

The annual women’s conference, held in this year on April 27, was devoted to issues of Islamic education and upbringing of children. The conference hall of the Islamic Cultural Center in Simferopol gathered more than 170 Crimean Muslim women of various age groups and various experiences of daily life, willing to learn new information, get advice or consult a psychologist. This year conference was undertaken by the Women’s Public Organization “Nur”.

The conference title “Mirror of My Soul” was chosen purposefully, as children notice change in the parents’ moods and see where and when their sincerity ends; they can see to what extent the parents’ actions correspond with their words; they absorb their values and habits… Children are their parents’ reflection, which can be seen perfectly well when a child is little.

Once words from the Holy Koran were recited, the floor was taken by Mrs. Fatima Amrullayeva, “Nur” chairwoman, who emphasized the importance of the chosen theme. It can be stated convincingly that the mission of mothers is more complicated and important than the other ones. The Messenger of Allah (may be peace and blessings upon him) said that if even Haj could be performed by one with carrying his mother on him, one could not compensate for one moan produced by her at child-bearing.

The first part of issues was devoted to the nuances of relations between parents and children. Reporters spoke about mother’s role in upbringing of a child; finding individual approaches to each child; methods for fostering harmonious relations in the family; observation of children’s and parents’ rights commanded by the Creator. Also, participants could receive advice from Mrs. Elinna Bekirova, a psychologist.

Teaching a child Islam by the way of Prophet

High morals of Prophet Muhammad (may be peace and blessings upon him), his wisdom, clemency and love for human beings made him not only the greatest man in the human history but the excellent parent. So, the next part was devoted to upbringing methods practiced by the Last Messenger.

There’re many parents asking themselves how they should make a child love the Creator, when they should start teaching him the prayer and the Koran, how they should bring him up a competent and practicing Muslim.

Emotional overtones and impressions of participants

Meanwhile, not only mothers enjoyed the event, because mothers’ reports were followed by the children who pleased the audience by poems.

By tradition, the conference ended by drinking tea with sweets, giving the participants a good chance to talk and discuss the information they had learnt.

They did not hide emotions:

“I have been visiting this conference several consecutive years, and I like it very much to use the learnt information in daily life. I can see the results of using reporters’ advice, and I can ascertain by my own that they have prepared perfectly well and their advice is not ‘out of touch with reality’… Great thanks to you!”

“I want to express you great thanks for enthusiasm, and for the warmth and kindness that you give to people. Iwishyouhealthandgoodness!”