A Hundred Grocery Packs For Poor Muslims of Kherson Region 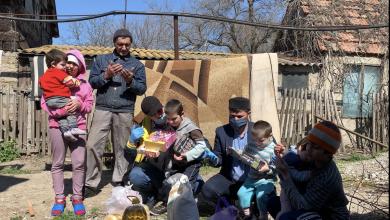 One hundred grocery packs consisting of flour, rice, sugar, and sunflower oil were distributed in Novooleksiivka (Kherson Region) and its surroundings by CSUAUA Alraid volunteers. That aid was provided to the poor, who became even poorer due to the enforced quarantine and loss of their jobs, along with elderly people and large families. Besides, packs for the latter also contained toys in order to brighten up the little ones’ day. The distribution process can be partly seen in the videos filmed on Saturday and on Sunday.

The volunteers have been working hard for 3 days. On Friday, they bought the groceries and delivered them to the Novooliksiivka Mosque, where they were stored for the night. In the morning, the first thing they did is repacked sugar from large sacks into smaller individual bags; in the noon, grocery packs were complete with sugar and ready for the delivery. So the delivery started.

Noteworthy, local Imam Usein Tokhlu and his assistant Iskander Avci were of invaluable help in defining people who needed such help. A Zaporizhzhia Imam Muhammad Mamutov, who took part in the benefit, thought it was very telling:

— It was clear that the Imam cared for his community and knew every home in need. It was the Imam and his assistant who organized the local volunteers to help us unload and load the transport; they were the ones to figure out the optimal route and to take us to every poor household.

Novooleksiivka and its surroundings are perhaps the largest Crimean Tatar compact settlement on the mainland Ukraine. It was here where the first Crimean Tatars returning from deportation to Crimea, but driven out of the peninsula by late Soviet and early Post-Soviet authorities’ resistance, settled.