Ramadan-2019: Grocery packs from German Muslimehelfen for Ukrainian Brothers and Sisters in Faith 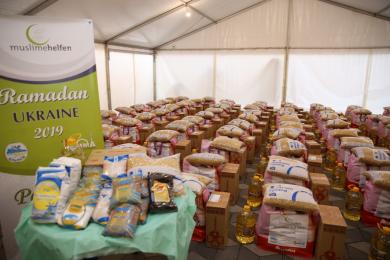 Today, the yard f Kyiv islamic Cultural Centre was crowded long before the Iftar time: there was a giveaway of the first 100 grocery packs of the two hundred, bought for the needy families of internally displaced persons in terms of cooperation between “Alraid” Association, RAMU “Umma” and a German Charitable Fund Muslimehelfen. Each pack contained 5kg sugar, 5kg rice, 5kg buckwheat, 8kg frour, 5kg pasta, 5L of sunflower oil, 0.5kg tea, and, as it’s preferable to break the fast with dates, 2.5kg dates.

About another hundred of such packs are to be distributed in Zaporizhzhia and Lviv. But that’s not all: Kharkiv and Dnipro are amidst calculation of their need for such packs for the Muslim IDPs living there.

Noteworthy, cooperation with Muslimehelfen began in late 2015, when a famous Muslim public figure Ahmad von Denffer attended Kyiv ICC. The guest from Germany had an important mission of finding a reliable partner for providing aid for the Crimean Tatars who were forced to leave the occupied peninsula. He found such partners in  “Alraid” Association and RAMU “Umma”, and so the benefit was launched.