How Ivan Franko familiarized Ukrainians with Islamic culture: a presentation of the book “Ukrainian Enlighteners and Islam” 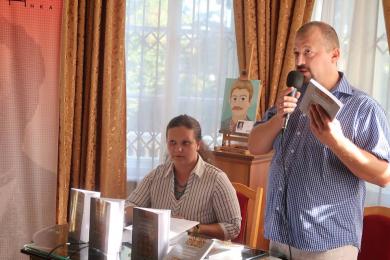 Almost at the same time, when the Azerbaijani political scientist, Timur Atayev, presented his books in Kyiv, the presentation of another book, published due to the AUASO “Alraid” assistance, was launched in Lviv.

On September 19, in Ivan Franko Literary and Memorial Museum, Candidate of Philological Science, Solomiya Vivchar, spoke about her work “Ukrainian Enlighteners and Islam”. A well-known orientalist and translator of the Quran into Ukrainian, Mykhailo Yakubovych became an author of the foreword to the book. The Head of the Museum, Bohdan Tykholoz was a moderator of this event, launched at the 25th Lviv International Book Forum.

Invited to the presentation, Lviv ICC imam, Murat Suleymanov, thanked Solomiya Vivchar for her research, which reflects the prominent Ukrainian figures’ perception of Islam. This topic has not been raised by anyone for a long time, taking into account the Soviet position after the Crimean and Volyn Tatars had been totally deported: “There are no Islam and Muslims in the Ukrainian SSR ".

The author has collected materials for more than two years, has analyzed many works, starting from the chronicles of the Ancient Rus’ times. She paid the particular attention to the works of Hryhoriy Skovoroda, Panteleimon Kulish, Taras Shevchenko, Ivan Franko, Agatangel Krymskyi, Mykhailo Kotsyubynskyi, Lesia Ukrainka, and also writers of the XXth century.

By the way, Ivan Franko, in the museum named after him the presentation was held, opened the culture of the Islamic world to the Ukrainian reader.