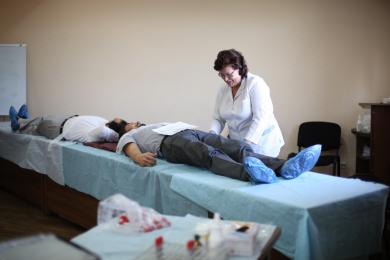 Another blood donation benefit was held at Kyiv Islamic Cultural Centre. Noteworthy, the first benefit by “Stan’ Donorom!” (Ukr.“Be a Donor!”) had been held exactly 6 years ago, on 31 August 2012. This time, the plans were to just refill the stock of blood at Kyiv City Blood Centre, but a Muslimah approached the organizers and asked to donate blood for her relative who was to have a surgery. The medical workers contacted their front office and accepted the change, so the things started happening.

26 persons registered for medical examination, but only 19 of them could actually donate blood, while the rest had to postpone the procedure due to some medical conditions. 19 persons donated 450ml of blood each, resulting in 8.55L in total.

One of the donors, Husam, just returned from a hospital where his wife gave birth to their second daughter on the very same morning, so his blood had to be just filled with joy as the happy father decided to celebrate the special day with a blood donation.

“Be a Donor!” published an acknowledgement for everyone who joined the bendit, and presented their report:

“First of all, our heartfelt grattitude goes for everyone who came and shared their blood, and also placed their meal compensation as a donation to our “sadaqa” box. The overall sum was UAH803, and that money was transferred to the account of “Volunteer Movement Mariam”, for they are getting ready for their next charitable trip to Korostyshiv Orphanage” on 22 September. By the way, you can join the fundraiser, for the full list on necessary things is published on the event’s page on Facebook.

Today, there were less donors than we’ve expected, so we had some leftover food (bread, cheese, sweets), which we (with the permission of Kyiv Islamic Cultural Centre, the regular sponsor of tea parties at our benefits) decided to give to “Feed the Homeless Initiative”, supported by the “Volunteers Movement Maryam”, to be used at their nearest benefit on the very next day.

And, of course, we would like to thank everyone who helped to prepare the benefit: those who helped in preparing the room, did the sandwich making and mess duty, helped the donors in filling in their questionnaires, etc. The event wouldn’t be possible without you all!”