“When We Seek Our Quest, We Will Do Our Best”: Teenager Scouting Camp in Carpathians 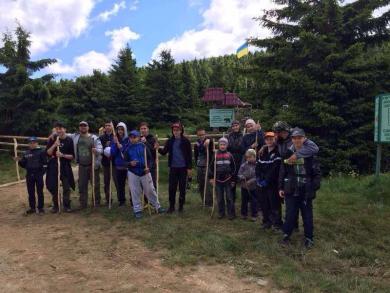 So, it’s been the third day since a group of young scouts aged 13 to 16 who volunteered to achieve some basic survival skills and try themselves living in the wild left for Carpathian mountains.

In their backpack lie only bare essentials: a sleeping pad, a sitting pad, a safety bowl and a safety cup, water bottle, utensils, a folding pocket knife, a change of clothes, socks, undergarments and footwear, hygiene products and a raincoat. And, of course, a stock of provision for the whole 6 days: each one is responsible for carrying his own stock of food.

During the short phone conversations with their parents unabashed delight is clearly heard: here we made a camp (on our own!), and made a list of duties, and shared the duty hours, and conquered the Hoverla… By the way, sense of responsibility for both themselves and other members of the group increased dramatically, and there came the perception of them all as a team. For instance, when one of the boys was feeling unwell, two other lads volunteered to quit their conquest of Hoverla too and stay with him in a temporary camp just to support him.