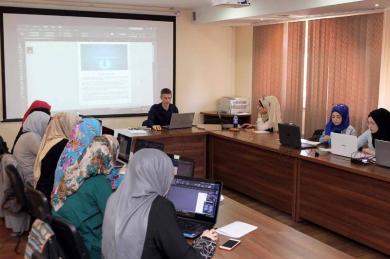 In late April 2017, Women’s Department of Kyiv Islamic Cultural Centre invited young women aged 16-24 to take part in a training “Composition and Visual Design for Women” that lasted from 30 April to 2 May. The ICC promised to cover the participation costs, and there were so many people eager to sign up that they even had to remove the announcement posters for they could not accept any more applications.

Desire to study was the only requirement for the students, and they had plenty of it. For one,mytro Polonskiy, the teacher, noted: “These young ladies are thirsty for knowledge. Our course has a very tight schedule, and there’s plenty of information to learn, but they are trying hard and doing their best, taking notes and asking questions, striving to get a deep understanding of the subject. Their interest in obvious, so, as a teacher, it’s a pleasure to work with such audience”.

Every participant received her certificate upon the completion of the course.

It must be said that student’s weren’t the only ones to learn something new during those three days, for the teachers discovered a lot as well. Leonid Voitenko, the second teacher, says he hed to totally revise his perception of Muslim women: “It’s a whole new Universe for me. I suppose I had totally been in thrall to those stereotypes that, as far as I could see with my own eyes, were totally untrue. I was impressed by their wide knowledge and friendliness, and I really liked their will to learn and teach others”.