Participation is already a victory: the results of the All-Ukrainian contest of Qur’an recitations 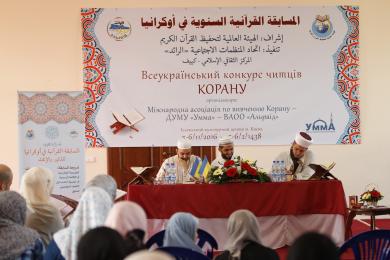 On 5-6 November, Quran reciters from all over Ukraine, adults and kids, who are quite fluent in Arabic, as well as those, who know only the standard phrases in the language, gathered at the Kyiv Islamic Cultural Centre to compete for the first place in their categories.

About sixty participants worried and constantly repeated those parts of the sacred text, which come the most hardly to them. Someone of them managed to learn the whole Quran, someone learned by heart only half or one third, one sixth, or even fifteenth part, but all of them put their hearts and souls into their recitation. There were 8 winners for three prize-winning places in each category. It is not surprising, because, according to Said Ismagilov, mufti of the RAMU "Ummah", the participation in this competition is already a victory. It is a victory not only over the laziness, apathy, lack of time and concentration, but it is a victory over worldly temptations, for the benefit, expected in the eternity.
Sheikh Haidar al-Hajj (the teacher of the Quran in the capital ICC), Imam Bilal Hamzah (Odesa), and Imam Edgar Devlikamov (Dnipro) assessed quality of recitation, knowledge of the text and compliance with the Tajwid rules.

AUASO "Alraid" holds such large-scale events every year. It encourages the healthy competition in such noble fields as increasing of religious literacy, spirituality, as well as interest in the study of the Book of the Almighty. That’s why the contestants prepare very thoroughly.

A follower of Islam should be guided by the Quran always and everywhere, that’s why he should, at least, familiarize himself with the Holy Book or even better he should study it carefully. And, if possible, he should learn by heart the parts of Quran as many as possible.

Of course, we study Quran not for worldly benefits, but organizers considered it important to award the level, achieved by each of the participants, with diplomas for participation and for prize-winning places. The winner of the each category was also awarded with money prizes.