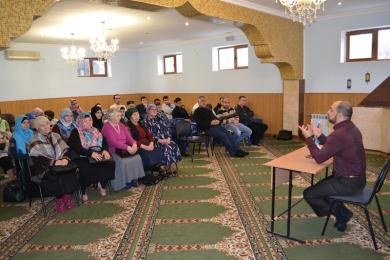 All sincere Muslims aim to be like Prophet Muhammad, peace and blessings be upon him, as much as possible, — by their good character, non-indifference to other people’s problems and sorrows, by their commitment in worshiping God. In order to ease their self-improvement, it’s the 10th time already when AUASO “Alraid” holds annual cultural educational caravans. In terms of those, lectures, seminars, free literature dispensation, children’s fests and other themed events are organised.

This year, the caravan was launched on November 20 in Zaporizhzhya, where Mr.Tariq Sarhan, Head of AUASO “Alraid” Islamic Culture Department gave a lecture on Muslim morals with Prophet Muhammad, peace and blessings be upon him, as a role model. He then did the Friday preaching on the importance of remembering the God not only by words but by deeds. After the prayer, he gave a lecture on four qualities of the last Messenger (peace and blessings be upon him) which made him the greatest man in history. The lecture was attended by more than 50 persons.

On Friday, November 27, themed events were held in two cities, Donetsk and Kharkiv. It bears reminding that it’s been the 10th, jubilee, caravan this year; they had to postpone it last year due to the military action in Donbass. Donetsk held the first of 12 events planned for different towns and cities of Donbass.

More than a hundred persons attended the lectures by Mr.Hamza Issa, Head of Donbass branch of AUASO “Alraid”, and Imam Rinat Habibutdinov, who spoke on the Prophet’s (peace and blessings be upon him) high morals. Little Muslims performed nasheeds and made a presentation, and received presents in the end of the evening.

Mufti of RAMU “Umma” Said Ismagilov attended Kharkiv on November 27, where he gave a lecture on the role played by Prophet Muhammad (peace and blessings be upon him) in spreading Islam, and stressed the importance of learning the Prophet’s biography. That was the first of the themed events planned by Kharkiv ICC to celebrate the month of Muhammad’s (peace and blessings be upon him) birth.