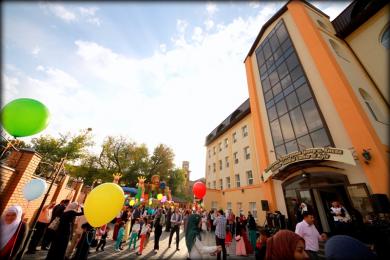 A fall day of September 24 was filled with warmth coming from both the sun and the hearts of Ukrainian Muslims along with their adherents all over the world. With such mood of heartiness, friendship and mutual help, Eid al-Adha began with a festive prayer. People came in advance so they could participate in the joint dhikr before the prayer.

Traditionally, an ambulance, a fire-fighters crew and law enforcers were around in order to safeguard the mass event. Some novelties, however, were seen, For instance, public order and safety of the people praying  in Kyiv, Lviv and Odessa were secured, instead of traditional two militia officers each, by the new police patrols. Police officers eagerly talked to people and made pictures with everyone willing, and also helped a Kyiv toddler, who got lost in the crowd, to reunite with his mother.

After the festive prayer attended by about 2,500 people, both Muslims and visitors of the ICC were invited to have a snack. The organisers tried their best in order to make the festive programme interesting for both adults and kids, and at the same time made sure that Crimean Tatars, deprived of a possibility to mark this day in the land of their ancestors, wouldn’t feel abandoned — and played Crimean Tatar melodies for them.

Many Crimean Tatars came to Kyiv ICC, including their leaders Mr.Mustafa Dzhemilev and Mr.Refat Chubarov and representatives of Kyiv Crimean Tatar Community. They participated in the joint prayer and made duas for Re-union of Ukrainian territories, safety and wealth for our country; after exchanging congratulations with other ICC visitors, they treated little Muslims with sweets.

Parishioners of Lviv Muhammad Asad Islamic Cultural Centre crowded both the building and the yard, for the small mosque hosted about 350 believers.

The kids receives their invitations for the feast on the following day. It bears reminding that little Muslims from Lviv are having a three-day celebration of Eid al-Adha this year. On Friday, September 25, a children’s fest will be held between 4 and 9 PM at “Children’s Planet” (202 Stryiska Str, free entrance for people with flyers), with quizzes and gifts. This event is being initiated jointly by AUASO “Alraid”, “Crimea_SOS” Project and local Crimean Tatar Community for the second year in a row.

On Saturday, children are welcome to the ICC for a sweet buffet and a quizz that are to be held between 3 and 5 PM.

More than half a thousand believers came for the prayer to Kharkiv ICC. Parishioners and guests of the mosque were invited for a treat right after the payer and the preaching was over, and festive programme with presents was awaiting for the kids. At the same time, the men worked hard to finish slaughtering the sacrificial animals before the dusk.

About three hundred persons gathered for a joint Eid prayer at the Islamic Cultural Centre of Zaporizhzhya. After the prayer, women and children stayed to enjoy the special programme, and men hurried up to the place of sacrifice.

more than half a thousand Muslims gathered for a joint Eid prayer at the Islamic Cultural Centre of Zaporizhzhya. After the prayer, women and children stayed to enjoy the special programme, and men hurried up to the place of sacrifice.

Small office of the Sumy Social Organisation “Druzhba” (Ukr. “Friendship”) accommodated more that 120 Muslims. They were happy to see each other despite the fact there was barely room to move. After the prayer, everyone left in order to make sacrifice privately and give the meat to poor people as soon as possible, also privately.

More than six hundred people gathered on this day of joy at Dnipropetrovsk Islamic Cultural Centre. Parishioners and guests of the mosque were invited for a treat right after the payer and the preaching was over. Children got their portion of festive mood with the help of bouncy castle, gifts, cotton sugar and interesting competitions; women had their own festive programme as well.

Besides, Dnipropetrovsk Muslims invited the local officials and representatives of other religious communities for a joint dinner in order to make it a really day of interfaith union, for none of the world’s three monotheistic religions denies the story of Abraham, a man devoted to his God so much that he was even eager to sacrifice his beloved and long-awaited son to Him.

About three hundred persons came for the Eid al-Adha prayer in Vinnytsya. Parishioners and guests of the mosque were invited for a treat right after the payer and the preaching was over, and then the Muslims split: a festive programme was awaiting for women and children, while men hurried to slaughter sacrificial animals in order to give avay the meat on the very same day.