“I thank God For Having Been Born And Living In A Country Of Initiative People!”: Kharkiv Muslims At “Cooperation For Salvation” Forum 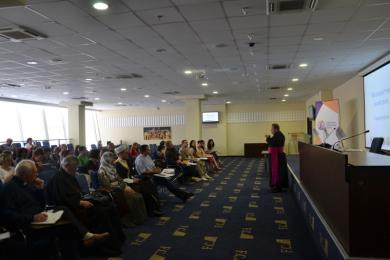 “I thank God For Having Been Born And Living In A Country Of Initiative People!”: Kharkiv Muslims At “Cooperation For Salvation” Forum

All-Ukrainian Forum “Cooperation For Salvation” held in Kharkiv on May 25-27 is a new event called to become a ground for cooperation of state authorities, research officers, educators, NGOs and leaders of the social initiatives, who helped and continue to help everyone harmed by the military action in Ukraine and occupation of part of its territory.

Kharkiv Muslims are deeply involved in different social projects of that kind, so they couldn’t stay aside and joined the discussion in order to work out a strategy in order to achieve maximum effect. The Forum was facilitated by “Ukrainian Peacekeepers’ School”, which itself is the joint project of a coalition of government and non-government organisations from ukraine and Poland supported by the UK Embassy. Three-day work resulted in a resolution.

Representatives of different churches and religious organisations blessed the event. They found it important, as most population of the cities not affected by the war don’t understand its realities, and some people even try to disregard this topic and avoid watching the latest news in order to “save their nerves”. And this is indeed the God’s blessing that there are many people who don’t duck and dive and don’t hope that “some upper hierarchy people will think of something”, — but unite and act.

Father Victor (Marynchak), archpriest at Ukrainian Orthodox Church (Kyiv Patriarchate) stressed that all the religious organisations must unite their efforts in the field of rehabilitation of Ukrainians affected by war.

This thesis was boost by Mr.Yevhen Glushchenko, Imam of Kharkiv Islamic Cultural Centre and Deputy head of RAMU “Umma”: “I thank God for having been born and living in a country of initiative people, because it’s impressing what the ordinary Ukrainians (volunteers, fighters of voluntary battalions, the Army that regenerated in front of us) did.”

“It’s people’s everyday heroic deed that they don’t wait for favourable circumstances and don’t give up no matter what,” — Mr.Glushchenko said, — “and we, the Muslims, also try to do everything we can in order to support our Homeland in this grievous hour: we feed the internally displaced persons, collect parcels for our soldiers and clothes and personal items for the resettled people, visit the wounded at hospitals, donate our blood and, of course, we pray Allah Almighty for peace and blessings for Ukraine in our prayers.”

The participants were aligned with the facilitators that there was a range of problems to solve immediately, as not only Ukraine’s integration to Europe depends on it, but its very survival as a State. Finding solutions is burdensome on both the State structures and the Civil society that only started entering its maturity period.

Mr.Paweł Tshichinsky, a guest from Poland, spoke of the stages of his country’s integration into Europe, and adviced the Ukrainians to never say die: “when we launched the integration process, we faced loads of negative stereotypes about us. But we worked hardly and persistently in order to transform our society, and this hard work helped us overcome this prejudice and position ourselves as equal participants of European Civilization”.

“EU is not  some “equalizer” whose participants have to abandon their own heritage, their specifics and culture,” — Mr.Tshichinsky noted, — “but is rather based on individual patriotism of every participant and achieving common goals in terms of equal partnership.”

The participants indicated other problems besides the  poor understanding of realities of war by most population: absence of common strategy for information confrontation against Russian propaganda; no developed model of local self-administration (although this idea is widely supported by the public, nobody knows what to do with it in practice); tension between the local people and the National Guards, voluntary and police battalions in the ATO zone; contradiction between ethnic and national identity of the most of the population of the South-East; no clear model for integration of people of occupied Donbass in all-Ukrainian and European cultural context.

The Forum resulted in a resolution where the participants summarized their three-day work, and new contacts and ideas for implementation of the joint projects with other participants.