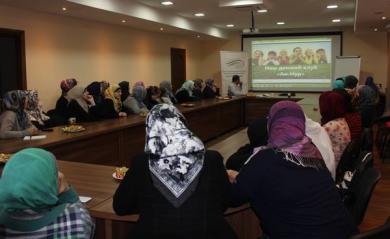 A general assembly of Women’s Social Organisation “Maryam” was held last Saturday on March 28, where reports on the previous period’s work and expenses were made and elections of the new Executive Board and Head of organisation were held.

42 activists participated in the secret ballot and elected the Executive Board (7 members of 27 candidates), which, after several rounds where votes for two candidates were equal, elected a new Head of WSO “Maryam” among them for the following two years. Ms.Yulia Fryndak became the new Head, having replaced repeatedly re-elected Ms.Suzana Islyamova on this post.

We wish the new administration to be successful in striving for their goals and have effective and balanced teamwork. May God bless you all and your efforts!

It bears reminding that WSO “Maryam” had its 10th anniversary in the end of 2014. Ms.Suzana Islyamova presented its achievements in terms of  World Conference “Women’s Role In Charitable Work” affiliated to the Government of Kuwait, which helps in finding sponsors for women’s charitable initiatives. Women from other countries of Eastern Europe and some Arab countries participated as well. This presentation led to honouring “Maryam”’s fruitful work with a special award.