Assault On “Charlie Hebro” Hits Muslims Over The Europe 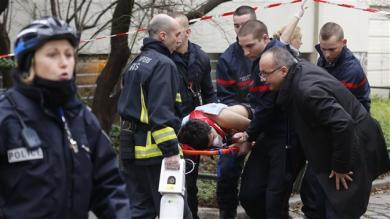 We, the Ukrainian Muslims, join our coherents all over the world in their sincere condolences to the families of the late journalists and policemen, including one Muslim policeman, and also pray for the soonest recover of everyone injured. This incident shocked us to the marrow of our bones, and there’s no use in denying that the first reaction was “I wish there weren’t any Muslims among those terrorists”. First of all, because such actions are strictly denied by the religion of Islam, and not least because of the very likely increase of islamophobia.

If the armed people really shouted “Allahu Akbar!” (“God is the greatest”) while shooting, such people trench on His sanctity by claiming their own desires as the God’s will. Making oneself an idol (therein lies placing one’s desires on the same shelf with God’s prescriptions) is a grievous sin.

Islam prohibits taking away another person’s life no matter how we disagree with their views and actions. Despite the fact that the magazine published caricatures of Prophet Muhammad, peace and blessings be upon him, which of course hurts Muslims’ feelings, such matters have to be handled reasonably and in terms of each country’s legislation.

Our Prophet, peace and blessings be upon him, didn't preach violence to be a solution to all the problems. Never in history has hatred or violence resolved any issues permanently and it will not do so in future.

Violence begets violence. The cycle of hate and counter-hate, violence and counter-violence needs breaking, otherwise, the consequences were overcome for many centuries.

No one can draw someone to love and respect for the Prophet by violence; this method, as a matter of fact, was rejected by the Prophet himself, who, on the contrary, taught us to draw interest to our religion by a good role model,  a kind word, appealing to the companion’s mind and relying on the facts and values recognized by both parties of the dispute.

We are very thankful that most of the world’s Media didn’t rise to provocations and refused to re-publish those caricatures, to close the cycle of hate and counter-hate.

French Muslims joined their compatriots in the mourning processions, Muslims all over the world bring flowers to the French embassies as well as non-Muslims, the family of Ahmed Merabet, a policemen who died while trying to stop the terrorists, make their preparation for the funeral as well as the families of the other victims… Would it be just to insult all these people just because someone considered oneself eligible to redraw this world as they understand it, neglecting both the religion they claim to defend and the lives of other people?

We also stand by every word of other Muslim organisations’ appeals to unite in this hour of need and stand up to the evil, that threatens to ruin our fragile good neighbourhood. Let’s discover more about each other and ourselves, and bother to find the origins of the ideas someone tries to force into our heads.

One of the main principles of the Roman Legislation, which is the base of the modern European civilisation, orders the judges to answer one question in order to provide a comprehensive trial, and that question was “Cui Podest” — “Who benefits from it?”

Neither the multiconfessional Europeans, who is once again thrown into turmoil and mutual distrust, benefits from that, nor the world’s 1.5 billion Muslim community, who once again faced humiliations from inadequate people, up to physical intimidation, and will once again see the defensive caricatures all over the Media.

Let’s base on the things that unite us, help each other, respect each other — this is the only way we can prevent someone evil from cashing in on our pain, both physical and mental.