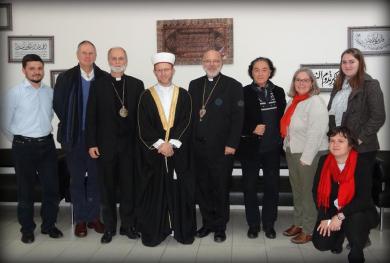 After the visit paid to Mufti of RAMU “Umma” Mr.Said Ismagilov by Mr.Borys Gudziak, the Greek Catholic priest and the Eparch of the Ukrainian Greek Catholic Eparchy of Paris on the elevation of his Exarchate to a full Eparchy, or Eastern-rite Diocese, by the Pope on January 19, 2013, who brought along some journalists from Europe and North America to Kyiv Islamic Cultural Centre, the Mufti in his turn visited the Conference “Ukraine and Vatican”, facilitated by the Department of Religious Studies at The Institute of Philosophy of the NAS of Ukraine.

Within the framework of the COnference, Mr.Ismagilov had an opportunity to greet the Head of Ukrainian Greek Catholic Church Mr.Liubomyr Guzar and the Kharkiv-Zaporizhzhya Bishop of Roman Catholic Church Mr.Stanislav Shirokoradiuk in peron.

Being given the floor by the organizators, Mr. Ismagilov noted that Ukraine is moving forward to Europe and there was no doubt in that, as that was not only the nation’s choice, but also the space formed historically. Ukraine is the largest European country. And if Ukrainian nation chooses further integration to Europe, they need to have clear understanding of what the European spiritual space and spiritual life are.

Ukrainian Muslims need to not only become close with the European Muslims, but also learn the European spiritual space mainly formed under the influence and auspice of Catholic Church, as insight to historical reasons of some or other social processes will ease mutual understanding between individuals.