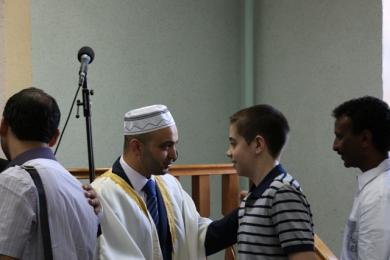 Tense situation in the country influenced not only inhabitants of Crimea and Donbass, but but in now steady Odessa as well, where it’s been the first time in several years that they didn’t hire a stadium for the festive prayer. About 500 visitors were accommodated by the local Islamic cultural Centre mosque. Bouncy castles, treats and interesting funny contests with clowns were awaiting the kids after the prayer.

While the children were having fun, the adults enjoyed treats and conversations. Besides, volunteers from the social organisation “Al-Masar” divided zakat-al-fitr between needy Muslims and handed their share to each of them before afternoon.

In Vinnitsya, on the contrary, this year’s Eid prayer witnessed a sort of revival, as up to 300 people came for the festive prayer. After that, the parishioners got their treats, congratulations exchange and communication.

ICC administration at Zaporizhzhya decided to combine the feast with best Qur’an reciters’ Awarding ceremony. Not only the prize-winners were awarded, but their mothers as well - for their input in encouraging their children to learn the Holy Book.

Staff and volunteers of the centre also arranged treating (sween buffet and tea) for more than 150 Muslims who came for the festive prayer.