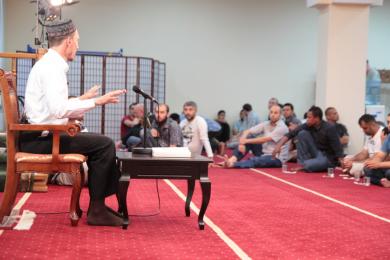 One third of Ramadan is in the past already. “Alraid” Islamic Cultural Centres traditionally do their best to offer their visitors a variety of spiritual and educational events. Unfortunately, we are deprived of such a possibility in Crimea this year, and have certain problems at the region of Donbass. However, we are all united by joint prayer for peace, unity and security of our Homeland in this Holy month when all dua’s of people breaking their fast in the evening are accepted immediately.

Iftars, lectures and taraweeh prayers are held at Kyiv ICC on a daily basis. Besides, the visitors are also offered to attend lectures on fiqh and tajweed for women, children and men, reminders and stories from the Holy Qur’an.

Beautiful and expressive recitation of the Holy book is taught by Shaikh Haydar Al-Hajj, a teacher from the Higher Medrese of Hafidh in Crimea temporary forced to leave the peninsula.

Scale reconstruction of Kyiv ICC building and yard is completed this year, so people can break their fast in the open air under tents settled for this occasion.

Muslims of Luhansk found themselves deprived of the simple joy of joint worship: even their shortened Ramadan schedule (because of the night-time curfew), which included reciting the Qur’an before iftar (trice a week) and taraweeh prayers, after which the believers stayed at the mosque until 6AM (end of curfew), was canceled on Monday because of the aggravation of the situation.

In Donetsk, despite excessive numbers of terrorists from the neighbouring Slavyansk after the latter was liberated by the Ukrainian Army, iftars are still held twice per week, on Saturday and Sunday. But through it all, 15 to 20 people come to the mosque for a joint taraweeh prayer on a daily basis.

The air in the city is very high pitched: the streets, never overcrowded even in the daylight, get absolutely empty by 8PM. Besides, the separatists settled their own “curfew”, and several occasions of people returning from the mosques have been detained were reported recently. Fortunately, the terrorists only checked their documents and registration (if it was local) and let them go.

The situation is different in Kharkiv region, thank God, and Ramadan programmed is rather diversified at the local ICC. Iftars, lectures, lessons of Qur’an  are available on weekends, and small lectures after the prayers of Asr, taraweeh and lessons of Qur’an — on weekdays. About 100 people attend taraweeh prayers on weekdays and about 250 do so on weekends. Iftars will be held on a daily basis, God willing, during the last 10 days of Ramadan.

Iftars and taraweeh prayers are held on the daily basis in the city of Zaporizhzhya. Women and children, though, are rare visitors at these events, as they are held quite late due to the late sunset hours. Women and children mainly attend the ICC at daytime, and attend lectures and lessons. Programme on Tuesdays and Thursdays is optimized for kids.

There are reminders before the evening prayer, and Qur’an is recited between iftar and night prayer Isha. Seven young people decided to stay at the mosque for the whole month, the rest 40 to 45 regular taraweeh attenders leave for their homes after this additional prayer is over.

Iftars at Dnipropetrovsk ICC are held for men (60 to 70 regular attenders) and women (15 to 17 regular attenders) every other day in turns. Up to 40 people stay for taraweeh every day. Lessons before the evening prayer are also held at the mosque.

Half-an-hour lectures on Tafseer set the stage for iftars held three times a week at Odessa ICC (Saturday, Sunday, Tuesday), gathering 250 to 300 visitors. About 100 people stay for taraweeh permanently, and on the days of iftars the number is even higher. Reminders are given during the breaks in taraweeh, a Qur’an reciting circle gathers after Fajr, and women can attend short lectures after iftar.

Itikaf and a more intense lecture programme will be held during the last 10 days and nights of Ramadan. Odessa Muslims also prepare for the Qur’an reciting contest which is to be held on the 26th day of Ramadan.