What Unites Master Yoda And The Art Of Calligraphy? 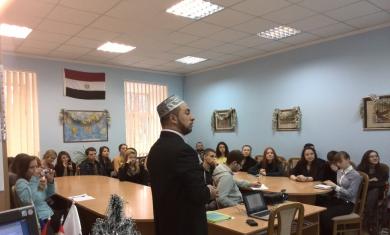 What Unites Master Yoda And The Art Of Calligraphy?

Mr. Tariq Sarhan, Head of the AUASO “Alraid” Islamic Culture Department, took a kind of a traditional “road tour” confined to the World Arabic Language Day. Arabic philologists of three Universities (National Taras Shevchenko University, National University of Kyiv-Mohyla Academy and M.P. Drahomanov National Pedagogical University) were waiting for him and his team to pay them a visit, bringing along a presentation and lecture on the History of Arabic Language and Calligraphy, and tasty Arabic tea, coffee and traditional sweets.

Are All Arabs The Same?

Of course not; and the matter is not only about personal qualities of a separate individual. Today representatives of multiple different tribes and ethnic groups are known as Arabs, just because they all speak Arabic. The dialects they speak, however, are full of their native words of non-Arab descend. These words are the markers of the true routs of the Arab-speaking ethnic groups.

They are united, however, by the classical Arabic, and the Holy Qur’an was the only reasons it didn’t melt into the dialects of the ethnic groups that adopted the Arabic culture.

Calligraphy Is Not Just Penmanship

The students, many of them having attended Tariqs lectures a year earlier, curiously and attentively listened to the lecture on a multiform art of calligraphy. many people in our country think that calligraphy is just a penmanship; this, however, isn’t true.

The masters of calligraphy spend months writing the same letter over and over again, until it’s permanently perfect and they can start practicing in writing another one. And they have to exercise every day after having mastered certain technique, as skipping even one day leads to deterioration.

The audience were especially excited to see a calligraphy in the shape of a popular “Star Wars” character Master Yoda.