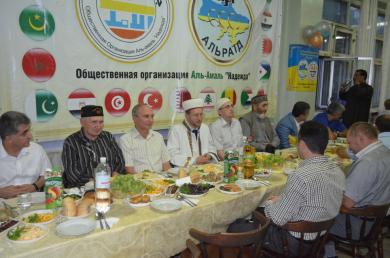 On the eve of August, 1 Donetsk City Iftar took place, gathering guests from both Donetsk and Luhansk regions. More than 500 Muslim accepted the invitation of the Murti of Religious Administration of Muslims of Ukraine “Umma”, “Al-Amal” social organization and AUASO “Alraid”. Ruslan Abkikeyev (Mufti of Spiritual Centre of Muslims of Ukraine, Rinat Aysin (Mufti of All Ukrainian Muslim Administration “Unity”) and the famous Qur’an Reciter and Al-Azhar Theologist Shaikh Rafaat Hussain Ali Yusef were the special guests of the evening.

Shaikh Rafaat Hussain began the event with his wonderful recitation of the Holy Qur’an 20 minutes before the sunset. After the call for evening prayer the believers broke their fast with dates and water, performed the evening prayer altogether, and then proceeded with the meal.

After supper local religious and public leaders took the floor, and then everybody moved to “Al-Amal” Islamic Cultural Centre Mosque where they prayed all night long, as the Muslims of Donbass wanted to spend the 25th night of Ramadan praying and reading the Qur’an.