Contest of artistic works: young Muslims from Donbass telling about miracles of the Koran 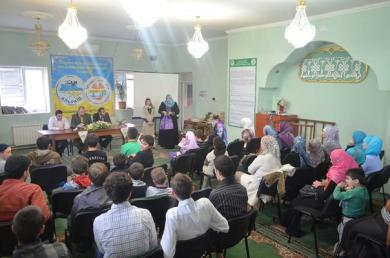 Contest of artistic works: young Muslims from Donbass telling about miracles of the Koran

A children’s contest of artistic works, “Miracles of the Koran”, was hosted by the Islamic Cultural Center “Al-Amal” (“Hope”) in Donetsk, with participation of Muslim girls and boys coming from Donetsk, Makeyevka and Konstantinovka.

Pleasant atmosphere was created by numerous spectators showing sincere support and care to all the participants. The latter, in turn, could show their competencies in subjects associated with various fields of scientific knowledge referred to on Koran pages and concerned with geography, history, biology, medicine etc. For easier view, almost all the children illustrated the performance by images or video clips.

The subject for contest was not chosen randomly, because the Holy Koran is the foremost value in the life of Muslims, the Scripture guiding on the way of Truth. The text of the Divine Book is truly unequalled and unique, having no analogy with literary works:  “Say: Verily, though mankind and the jinn should assemble to produce the like of this Qur'an, they could not produce the like thereof though they were helpers one of another” (Koran, 17:88).

The Holy Book contains multiplicity of wonderful phenomena that prove its Divine origin, as many unique scientific facts informed in the Koran fourteen centuries ago could only be discovered and investigated by scientists in our times thanks to technology developments of 20 and 21 centuries.

The sooner one starts with knowledge seeking, the better is for him

Summing up the competition, the first place was taken by Ilkin Kirimov for the subject of Pharaoh’s mummy, the second place – by Mohammad Issa for “Victory of Byzantine”, the third place – by Mariyam Mohammed with the report “Prenatal development of humans”.

Also, Karina Cheliker and Omar Belharuyev were winners in the nomination “Audience award”. The winners received valuable prizes, and encouraging prizes were given to all the participants.