Patriotism in the eyes of Crimean youth 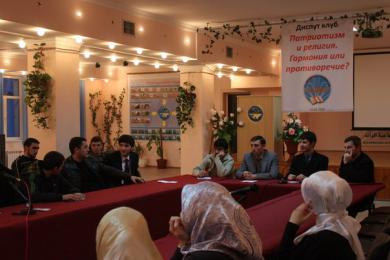 Patriotism in the eyes of Crimean youth

The Public Organization “Emel” held the next disputing club for youth on March 12, 2013. Subject for discussion was the link between patriotism and religion. Young people who came that evening shared their ideas about who could be considered a patriot, manifestations of patriotism and its place in multinational Crimean Autonomous Republic.

A perfect example of Muslim’s attitude to his Motherland can be seen in the Sunnah of Prophet (may be peace and blessings upon him). When he had to leave Mekkah and emigrate, he supplicated to the Most High: “O, Allah, make my love for Medina the same as my love for Mekkah!”

Prophet (may be peace and blessings upon him) was not striving to create a state for Muslims only, but a state built upon Divine principles, where both Muslims and non-Muslims would live in peace and accord.

Patriotism has special meaning for Muslims

In spite of a smaller than usual number of participants, the discussion was quite intensive. Also, participants touched on Crimean Tatar Diaspora abroad and ways to preserve one’s religious and national identity in Crimea along with being a genuine patriot of Ukraine.

For a Muslim, patriotism as love for native country has special meaning. It essentially means efforts to improve the condition of one’s people, to protect them from vice and mischief, to inform them sublime values. A Muslim should be pleased by good qualities of his people and encourage them; although proud of heroic pages of his nation’s history, he, however, should be able to see its wrong sides and do the best to reform them in a radical way.