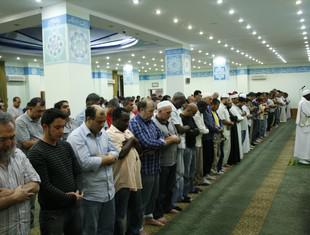 Visit to the Islamic Social Cultural Center takes you though into a different reality. Hard to believe that dozens of people perform namaz in broad daylight at the center of the capital, which outwardly looks very monocultural and monoreligious.

These people celebrate Ramadan, the Holy Month for Muslims, in which God sent his Prophet Muhammad a revelation - the Quran.

In Kiev there are about sixty thousand Muslims. These are foreign students, employees of embassies, comers from the Central Asia, Caucasus, Transcaucasia, Tatars and Muslim Slavs.

Said Ismagilov, Mufti and expert on Sharia, comes to a meeting in a keffiyeh, the Islamic headdress, and obscure clothing.

In the course of Ramadan the Muslims are trying to achieve a spiritual balance, be generous and patient. They can not take food or drinks at the daylight, and instead of vain imaginings and actions read the Quran. During Ramadan they should read the whole Scripture.   It is evening, but the sun did not set yet, so Ismagilov is still fasting, and earnestly prays, because Muslims believe that the actions and prayers in the Holy Month are accounted to them with vengeance. Just like sins.

Correspondent of Kyiv Post through her ignorance, forced him to sin by shaking his hand, while touching a woman is a sinful act. But political correctness of Ismagilov prevailed.   He said that it is quite hard for Muslims in Ukraine in Ramadan, since the specifics of their celebration, fasting and lifestyle at that time is not understood. "In our country it is not provided that someone will meet demands of Muslims – there are not so many Muslims in Ukraine, from one million to two millions," he says.

Ismagilov states that believers in Muslim countries are trying to take leave, make their working hours shorter, and change the schedule, "There's an employer, who also observes fast, understands how difficult it is to his employees and tries to meet their demands."

"I consider respecting the fast as a spritual and religious feat", he says.

Abdullah, a student from Libya, who does not name his surname out of fear of  being expelled from the university, is celebrating Ramadan in Ukraine the fourth time in succession. The most difficult it was in 2009: "Ramadan was the end of August, and somewhere in the middle of September. I went to the university first, and then stopped - it was too hard. You can not eat, you can not drink, you can not smoke", he says.

In general, the Quran does not prohibit smoking directly, but warns against the use of substances that stupefy the mind, or may cause harm to oneself or to others. "But I just came, missed my home and my classmates smoke in all breaks between the lessons. So I started to smoke, too", says the guy. After Ramadan of that year Abdullah was awaited in the university by a list of missed lessons for these three weeks. "If you are a foreigner everybody think that you have a lot of money. I say – I will work these lessons out. But the methodist in the dean's office pretends that he does not understand my Russian. They just want money".

Most of the daytime in Ramadan Abdullah sleeps. Several hours before the sunset he prays and starts to prepare the dinner. "Previously, when my brother was in Kiev, I called him and asked if he was going to eat already. But two years ago he returned home. One should also read the Quran every day. But I do not read", he laughs.   Although the ritual of Ramadan does not change, the date of this holiday changes every year, moving ten days closer to the beginning of the year. And additional difficulties arise when the fast falls on the middle of summer - the days are long and hotter and the nights are shorter.

In the Muslim countries that are geographically located to the south of Ukraine, there are no large fluctuations in length of day and night in different seasons. Ismagilov from the Islamic Cultural Center, whose family in his childhood lived in Donbas, recalls how his grandmother told about the Muslim fast in the Soviet times.   "At the time of the Soviet Union Muslims fasted in secret. And when she was young Ramadan was in the middle of summer. And the old men gathered, pretended that they simply met to talk, and quietly ended the day of fasting by drinking two to three samovars of tea ", he recalls.

"And I asked her, what, they really drank so much water? A long day, very hot, and all worked. In the Soviet Union you could not stop working: there were practically no idle people. And the people still endured all of that: not eating, not drinking, hard work, heat. And, gathering at nights, they could not eat until they drank enough water. It seemed to be interesting for me: it is almost impossible, on the brink of human capabilities. It seemed that my grandmother tells something of the scope of fiction" , he speaks slowly, recalling details from far childhood.

"When I started to observe the fast - it was January, February, when the days were short, cold, that was not difficult. Now here I lived until the summer and remember the stories my grandmother," he says.

Ramadan ends with the holiday of Eid al Fitr (or Uraza Bayram, Ramadan Bayram) when the new moon appears in the sky. This year the end of Ramadan falls on August, 29.