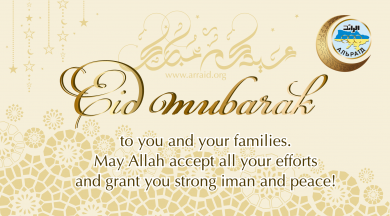 On 24 May, Ukrainian Muslims celebrate Eid al-Fitr — the end of fasting and of the Holy Month of Ramadan. It is one of Muslim holidays observed by the Muslim communities worldwide and celebrated with great glory.

Eid al-Fitr is the highlight of the whole month of fasting, the time for rejoining families over the festive tables; time of charity and great spiritual uplifting.

This year, Ukrainian Muslims were forced to spend the Holy month out of the ordinary way. The global problem of spread of the coronavirus infection and respective measures for preventing its prompt incidence dramatically changed people's usual ways, and forced them to adjust their religious rituals, meetings and celebrations. Those adjustments, however, not only failed to ruin the Ramadan spirit, but, on the contrary, urged the Muslim community to amalgamate and coordinate their effort, as well as to diversify and increase activities for the good of overall society.

Muslim communities of the Religious Administration of Muslims of Ukraine “Umma”, as well as Islamic Cultural Centres of Civil Society Union All-Ukrainian Association “Alraid” were able to quickly readjust their work.

Having realized the danger of the coronavirus infection and thus fully supporting the anti-epidemic measures enforced by the Government, religious communities of “Umma” adopted a new approach to religious activities. They cancelled congregational religious services, limited access to their mosques and Islamic Cultural Centres, and went online with their educational work and operation meetings. The main reason behind the adjustment was the Islamic principles of saving people’s health and lives, and gaining commonweal.

Muslim and social organisations became active members in a wide range of social activities aimed at overcoming the pandemic and helping the socially disadvantaged groups of Ukrainians regardless of their religious, ethnic or cultural background. In terms of a charity project called “One Body”, initiated by the Association “Alraid”, tens of thousands of grocery packs were collected and distributed among the needy from all over Ukraine, Severodonetsk to Uzhhorod, Sumy to Novooleksiivka (Kherson region). In many cities, they implemented programs of cooking and delivering hot meals. The volunteers sewed medical masks and gave them away free of charge in the city streets, collected aid for people made homeless by bushfires in Zhytomyr region, and chaplain imams visited the Muslim military personnel at the frontline. Noteworthy, such initiatives gained a wide support of Ukrainian Muslims as well as expat Muslim comunities in Ukraine, and even by the Embassies of Turkey, Indonesia, Malaysia, Pakistan and Qatar to Ukraine.

The initiative of President Volodymyr Zelensky’s initiative of recognizing Eid al-Fitr and Eid al-Adha as national holidays became a prominent event characterising the important and progressive role Muslims play in Ukraine's social and political life. The announcement was made during the last decade of Ramadan in the course of the Presidential meeting with the representatives of the Crimean Tatars, Ukraine’s indigenous Muslim people.

Thus, despite the global challenges, obstacles and hardship, Ukrainian Muslims managed to consolidate and offer a worthy response to them. They managed to go on in their work of serving peace, welfare and freedom, filling their work with new energy, meanings and forms.

On behalf of the All-Ukrainian Association “Alraid” we congratulate every Muslim upon Eid al-Fitr!

May Allah accept our fast, our prayers, our good deeds and kind words! Peace be upon us all! Eid al-Fitr Mubarak!