“Feed the Hungry” in Kharkiv and Zaporizhzhia: the Lower the Temperature Outside, The More People Come » Add new comment

“Feed the Hungry” in Kharkiv and Zaporizhzhia: the Lower the Temperature Outside, The More People Come 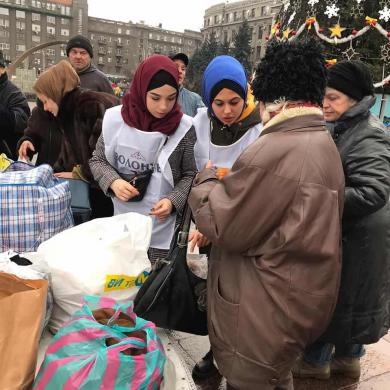 During the winter, Kharkiv Muslimahs dedicate several Saturdays per month to feed the homeless and needy people with hot meals. The meals distribution is usually held near the Southern Railway Station. The Menu includes a bowl of soup, a plate of pilaw with meat, as well as bread, tea and salad.

Meanwhile in Zaporizhzhia such benefits are held weekly, and it’s been over three months of Saturday meal distributions so far. Not only homeless people, but also (mostly elderly) people who actually have accommodation while living in extreme poverty, come for a homemade meal. According to the organizers, Muslimahs from Women’s organisation “Safia”, such benefit came true due to support of many people, who not only donate money, but share some of their own time and effort in order to buy, cut, cook the products, and then to serve them. Some of those people spend their only day off participating.

The volunteers noticed a certain correlation: the lower the temperature outside, the more people come for a hot meal. The prime cost of one portion is ridiculously low, just UAH 25. What can be served for that money? Considering that the volunteers don’t include the value of their own time, labour and consumables (like fuel) in the prime cost, just the food, there’s a full meal served for each person: a bowl of soup or borscht; a platter of pilaw, buckwheat or cooked whole grains; a piece of meat or chicken; a slice of bread, cookies, a sandwich and a cup of tea. Sometimes they even manage to treat their clients with fruit.

During that period, the volunteers were witness to plenty of touching stories, and one of those impressing them most was when a homeless man offered to share his food with his fellow in misery who was late for the giveaway. “You think sharing is just for those with surplus? But what is all the belongings of the person who shares can fir and be carried around in a single chequered bag? Once you consider yourself a teacher, the God makes sure to teach you such striking lessons”.