Terrorism is Destructive Ideology Regardless Criminals’ Backgrounds - Our Hearts With NZ 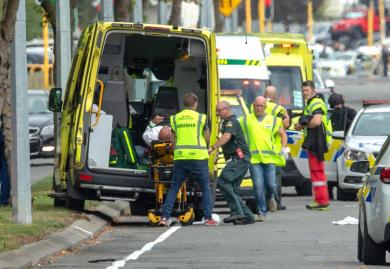 Terrorists are evil and they don’t care whom they hate and kill. A peaceful place like Christchurch where there were no tensions between people of different religions whatsoever is in aftershock, the whole country is paralyzed with fear - the fear that came with understanding that no matter how peaceful and cohesive your community may be, there can always be criminals inspired by some pervert ideas of “the perfect world order” and inspired by some criminal on the other side of the globe (namely Anders Behring Breivik). 49 people have been shot dead and 48 injured in attacks at two mosques (6 km apart) during Friday prayers in Christchurch, the worst mass shooting in New Zealand’s history.

So they came for Muslims; they chose two mosques as their targets, and they were specifically after women and children. In their manifesto, the criminals threatened Muslims in other countries with no history of interfaith tensions as well, including our home country, Ukraine. We can never be sure where the evil comes from, but we all have to stay united in order to successfully counter that evil.

Those criminals weren’t from some “third world countries”, those were just bad people who for some reason believed that the world should belong only to someone like them. But even if it were so, they would find another reason to target some group amongst themselves, some criteria to hate - because for evil people, the place of someone they hate can never be vacant.

Our heartfelt condolences go to New Zealand, where horrible crimes were carried out earlier today.  We share your shock and pain, and this is what we devoted our Friday preaching to. Our hearts and prayers are with you.