Muslims and Christians: Fruitful Cooperation at a Work Party at Kharkiv Hospital 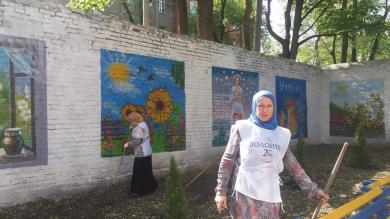 On the threshold of Ramadan, volunteers from Kharkiv Islamic Cultural Centre joined the work party at the Psychiatry Department of Kharkiv. On that day, Orthodoxs Christians, Protestants and Muslims joined their efforts in order to tidy up the Psychiatry ward’s yard.

As commented by Mr.Pavlo Dovzhenok, one of the organisers: “Christians, in the Gospel have that passage “Faith Without Works Is Dead”, and Muslims in the Qur’an have that passage “Any good deed is a sadaqah (charity)”. We can spend day and night critisizing and blaming everyone for being idle - everyone except for ourselves! Yet Ukraine is our common home for everyone living here and doing no harm, and the wish to help those who need our support has to unite us, despite the differences of out faith! Every deed is recorded up there, in the Heavens.”

Muslim women, together with the Mental ward patients, cleaned and settled the garden, planted trees and bushes, turned over the soil. At the same time, the men were occupied with tasks that demanded more physical strength: averruncating tree crowns and removing branches that were either in the way or a threat to the general public. They collected and carted away the branches, and later transported boarding and joists for the future reconstruction of some rooms of the Department. The teenagers, according to the organisers, had their hand in both activities, and even had time for some tree climbing: “Thus, we will increase their part of work so no energy will be wasted. Beware, the future of our Ukrainian society!”, they warned the teens jokingly.

Kharkiv Military hospital, along with the Military Hospital of Dnipro, are the closest ofnes to the frontline.  It was during the past 4 years that the hospital’s infrastructure was started being renovated, after many years of decadency.

The organisers whole-heartily thanked all the Ukrainians who help the Ukrainian military, concluding: “Better help your own army and you won’t have to feed the enemy’s military”.