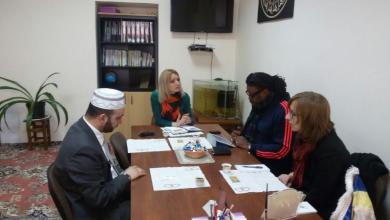 Representatives of the ODIHR (OSCE) Mission continue their last year practices of visiting different social and religious organisations in order to have relevant information about the situation in the society. A commission consisting of Ms.Azrah Yunuzovich, Deputy Head of Tolerance and Non-Discrimination Department, and Mr.Larry Olomofe, Combatting Racism and Xenophobia specialist, visited Odessa Islamic Cultural Centre last Wednesday. Similar visit is to be paid to Vinnytsya ICC this week.

According to Mr.Bilal Hamze, Head of Odessa ICC, the guests also wanted to learn about “Al-Masar” Social Organisation’s activities, principles, and current volunteering projects. They also asked if Odessa Muslims were subject to discrimination of any sort, namely religious, ethnic or racial, and whether the hijabi women have any problems with the way they look.

The Muslims assured their guests that Odessa was a very diverse and tolerant city where people respect differences, so they never faced problems of that kind.

Representatives of Muslim communities eagerly participated in a two-day OSCE seminar on Human Rights of March 26-27, and also announced their interest in participating in the educational events the Organisation scheduled for the end of 2015.