“Read Me”: Kharkiv Muslims In The “Live Library” Project 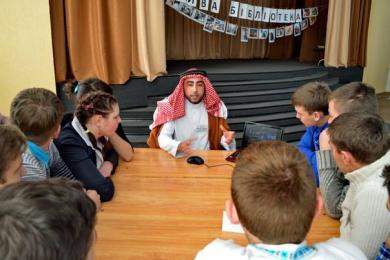 The volunteers answered the readers’ questions and showed the pre-made presentations with photos, in order to illustrate the topic they were discussing

Liceum students of Komsomolsk met people of Islamic cultural background this Monday, within the framework of “Live Library” Project. This event as a part of international “Stop Racism!” initiative became traditional, and was held at the Komsomolsk Professional Metallurgical Liceum for the fifth time, in cooperation with the Social Organisation “RODIS” Centre” and the Local Council’s Department of Family and Youth Affairs.

As usual, volunteers of Kharkiv social organisation “Al-Manar” were invited to speak about Islam, history of this religion’s development and spreading in Ukraine, and, of course, the culture of some Muslim countries.

Every “book” is a person who stepped forward to represent a “typical man or woman” of his ethnic, social or religious group. Their task is to give the maximum full and clear answers in a friendly manner to the questions the “reader” asks. The “librarians” demand respectful attitude towards every book quite the same as at any other public library: no offence or disdain is allowed, the “book” must be returned on time and in a good mood so that the next “reader” can use it as well.

The volunteers answered the readers’ questions and showed the pre-made presentations with photos, in order to illustrate the topic they were discussing. Most questions were regarding the culture of intersex communication, traditional weddings of different Muslim nations, means of earning the living in some or other Arab state, and, of course, the garments of the women who “even in the XXI century!” cover their body as well as their hair.

The lyceum students, of course, didn’t at once become experts in the matters of Muslims’ social and personal life, but still their Muslim compatriots will now stop appearing as some distant and incomprehensible social group. Moreover, the young people are more probably to contact Muslims both in Ukraine and abroad now, as the basic knowledge of the Muslim etiquette lessened their fears of “saying something wrong” and “being misunderstood”.