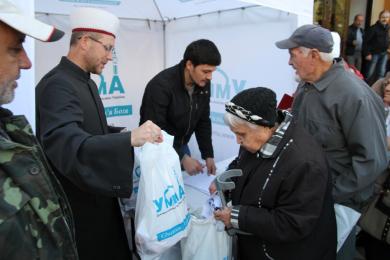 Every Muslim having enough resources for purchasing a sacrificial animal without making an unrecoverable hole in their family budget must make a sacrifice on Eid al-Adha (either in person or order the act of slaughtering to a Muslim butcher with an intention to sacrifice). At this, ⅓ of the meat is usually kept for one’s closest family, the other ⅓ is given to relatives and neighbours, and the third ⅓ is given away as a charity (all the three parts must be equal in quality). If one’s income, however, allows to give away more meat as the family and relatives and friends won’t be left without treats in any case, -  it is fine to give a bigger share of one’s sacrificial animal to those needy.

More than 7 tons of meat were distributed among the poor people via “Alraid” Islamic Centres all over Ukraine.It’s impossible to count how much more was given by the other Muslim organisations and individuals. It is gratifying that unindifferent people can be found even it such a difficult period, willing to see the other people’s problems and share what they have with those who have less. Even in Donbass where war is going on!

More than 500 families received their packs of meat (about 4 kg each). Among them were the 150 families resettled from Crimea and Donbass (mostly women and children), including 5 Muslim families.

The distribution of the sacrificial meat at the yard of Kyiv Islamic Cultural Centre started on the second day of Eid. Volunteers in a special RAMU “Umma” tent gave the packs with meat to those people whom they called and invited in person several days earlier. Another portion of about 100 kg arrived in the noon, as the members of the Turkish community “Sayvo” already gave their meat to every needy person they knew and asked the assistance of RAMU “Umma” in effective distribution of the rest.

Donbass Muslims’ strive for doing charitable deeds wasn’t cracked down by the military action in the region. The people not just attended the festive prayer (dozen and a half in Luhansk, about a 100 men in Donetsk), but also found means to perform the sacrifice! About 700 kg (beef and lamb) of meat became a wonderful gift for many people in that dashingly impoverishing region.

The delivery to different settlements also differed: they sent money to some places where the direct delivery wasn’t possible, so the lambs were bought and sacrifices on their behalf in situ, and used the public transport to get the packs of meat to the other places.

4kg packages of sacrificial meat were handed to many poor families in those cities: more than 800 kg were distributed in Kharkiv, about 400 kg in Zaporizhzhya and about 250 kg in Odesa.

More that 700 kg of meat were distributed among the needy people and the resettled families in Vinnitsya. Most of the sacrificial meat in L’viv was provided by the Crimean Tatar resettlers this year, as they wanted to help the resettled people who were less lucky in finding jobs and accommodation on the continental ukraine. About 150 kg of meat were distributed in Novoalekseevka (Kherson region).