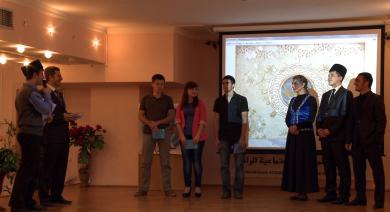 First season of “Ilmiy Kureş” (the “Brain Battle”) comes to end in Simferopol. The final competition where “Yaşlar Şurası” (“Youth Council”) and the Team of Tavria National University took place on September 30.

Muslim Dervishev, Head of “Emel” Social Organisation, thanked the participants for their interesting and obstinate fight, and also the spectators for their active participation. According to him, another competition is possibly to be held until the end of 2013. After that, the new season of “Ilmiy Kureş” is to start. “We hope that the second season will be even more interesting with even more participants from all over the Crimea,” he said. After the event was over, Mr. Dervishev awarded the both teams with valuable gifts.

How The Young Erudites’ Brains Were Tempered

According to the Social Organisation “Emel” activists’ plan, “Ilmiy Kureş” was meant to be intellectual developing competition for the youth and they were quite successful in achieving desired results. The first season was kind of “in-field probation”, when some organisational aspects were improved.

Crimean youth liked the novelty, and very soon the competition became popular. Two teams claiming upon the first place — “Yaşlar Şurası” and the Team of Tavria National University — left after a number of play-offs.

In the final game, both teams were asked to pick a category they would prefer to get task from, and answered the questions in turn.

During the breaks — and there were three of them — it was the spectators’ turn to wind up their brains and win valuable gifts in a number of interesting competitions.

The counterparts were equal, not giving each other a chance to win, so the plot thickened up to the end of the game.

Additional question, which the team of Tavria National University couldn’t answer as against “Yaşlar Şurası”, solved the outcome of the duel. It was the “Yaşlar Şurası” team who finally won both the game and the first season of “Ilmiy Kureş”.