“Islam is for cleanness”: Ukrainian Muslims join the rows of volunteers cleaning Ukrainian localities from waste and garbage 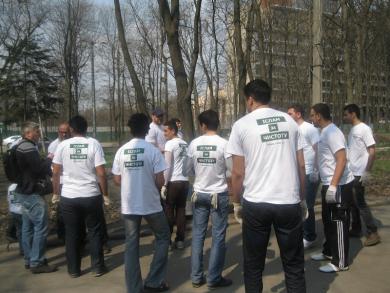 The All-Ukrainian action “Making Ukraine clean” was held on April 20, 2013, when  dozens of thousands people in more than 250 localities were cleaning parks, squares and forests, to free the original beauty of nature from heaps of waste and garbage thrown by careless people.

As Ukrainian Muslims could not stay aside from this good deed, activists from “Alraid” organizations in Kyiv, Simferopol, Kharkiv, Odesa, Donetsk, Dnipropetrovsk and Vinnitsa were picking up and sorting out the waste, cleaning up the areas instructed to them by action organizers.

By joining this project, they were going to show the reprehension of the wasted streets and recreation zones as well as the willingness to contribute in improving the environmental condition.

The action participants cherish sincere hopes that public administration offices will care to maintain the cleanness set by them, by putting urns in the streets and recreation zones and regular removal of garbage, and create well paid jobs to a good number of yard-keepers.

Nearly three dozens of “An-Nur” activists gathered in Pushkin park (in Kyiv), being equipped with gloves and garbage bags.

The action organizers supplied volunteers with instruments (rake, spades and hand-barrows) and designated the work site, just from nearby the monument to Pushkin (a famous Russian poet) to the walls of a café located far away in the park.

Watching adults’ enthusiasm, children coming with parents started working as well. Collected waste and garbage was being sorted out scrupulously; glass, plastic and other garbage was picked and put in separate heaps on the site, shown by the organizers, from where they were subsequently taken off by a truck.

Cleaning work could not be easily done due to the past autumn leaves that had to be raked up and taken off as well. Sprouts of green grass growing up with the spring warming could eventually see the sun light.

A yard-keeper cleaning the park area thanked the volunteers wholeheartedly and complained about great many daily troubles such as miser salary, dismissal of staff, enlargement of the area per worker, which proper cleaning was not in the capacity of one worker, lack of urns in the park (if available, only near benches), which made people throw wrappers or empty bottles right in the greens or under the trees…

It is great that the volunteers’ effort evoked positive responses from passers-by in this crowded park. Hope that each of them (passers-by) will care to keep this recreation zone clean.

This corner of nature was chosen for cleaning on the initiative the Youth Government at the Chairman of the Council of Ministers of the Autonomous Republic of Crimea (ARC) and the ARC Committee on construction for water use purposes and irrigated agriculture.

Young men and women tackled the problem all together and left the delightfully clean area: all the traces of “civilized recreation” of the city residents lacking civilized ecologic behavior were packed safely to fifteen durable bags. The task was being fulfilled with fun and game, which was filmed in video clip about this ecological expedition.

“Fifteen bags of glass picked in Kharkiv forest park, not to mention all the other things…”

A group of eleven activists from the Public Organization “Al-Manar” was cleaning a forest park together with other Kharkiv volunteers, more than a hundred in numbers.

Young people had no doubt in the expediency of their participation. Mr. Evgeny Gluschenko, a volunteer, explains: “As a Ukrainian who loves this country, it hurts me when I watch our parks and gardens turning into garbage dumps. As a Muslim, I am aware that I am responsible for the Earth that I will leave behind me to my children and that I shall be asked about this. I believe that when each person cleans the waste on his/her way, the world will not only be made cleaner, but ultimately better. We did not hesitate to join the action “Making Ukraine clean”, and we hope that next time there will be even more participants coming with families”.

Apart from local residents, there were Muslim foreigners as well. Mr. Imad Rayahni, a student of a Kharkiv HEE, admits that he could not stay aside: “For years of my stay here, Ukraine has become my second motherland. Careful treatment of the local nature and resources is a duty for us, foreigners. Careful treatment of the nature is enjoined in the ayah: “Do not make destructions on the earth”. Throwing waste and garbage here and there means breaking the balance created by the Most High. That is why we came to this action. A righteous Muslim is aware that it is a way for him to clean what was granted to humankind for free use through Prophet Adam many centuries ago”.

When coming to the area, young people were really stricken by the pollution scales: “Our group alone had to pick about fifteen bags of glass, not to mention all the other things… The scope of waste and garbage is hardly imaginable, as not only volunteers from our organization were working there… While the group of eleven people had this abundant “yield”, how much was picked by them?”

Although it was just a week before that activists from “Al-Mustakbal” organization cleaned a ravine from garbage and waste and planted trees and bushes there, volunteers could be found for this action as well.

Although only four Muslims came to clean the city park this time, nobody would dare say their contribution was small, because an evidence of its weight was 35 bags of picked garbage. Maybe, experiences got a week ago stood them a good stead.

Odessa: regaining the brand of “pearl at the sea shore”

A famous song of the soviet times compares Odesa with “pearl at the sea shore”. However, activists from “Al-Masar” and Muslim community of Odesa had to work hard to rake out waste and garbage from this “pearl shell”, under which it had been buried.

Two dozens of anxious Muslims from Odesa picked more than forty bags of garbage thrown by Odesa residents and guests in the Pobeda (Victory) park. Volunteers’ zeal was not unnoticed, as they heard sincere gratitude spoken out by both action organizers and occasional passers-by.

Muslim youth from Donetsk: a good model for other young people

In Donetsk, which is “the heart of miners’ region”, it was by irony of fate that a group of Muslim youth was given a task by action organizers to clean the area adjoining to the Donetsk City Youth Center.

Eleven activists from the Public Organization “Al-Amal” were working all the morning for the benefit of other young people and picked more than 25 bags of garbage on this area.

When looking at the changed area, artistic staff from the Center showed a pleasant surprise and spoke out great many thanks.