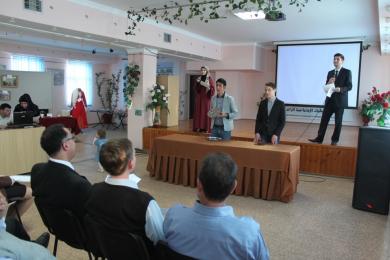 Clothes, article of basic necessity and healthy food are just a short list of orphans’ needs; some of them are badly in need for expensive drugs and money for medical treatment. The Women’s Public Organization “Nur” extended the action field by engaging artistic people of the Crimean peninsula in charity work.

A charitable auction “Dream-giving” was hosted by the Simferopol Islamic Cultural Center of “Alraid”, on April 19, 2013. The revenue (12 890 GRN; 1 USD = 8.15 GRN) was meant for two boys, Edem Edemov and Enver Purtov, who, apart from absence of father providing for them, have another common trouble, as both of them are fatally ill.

Charity is a core action purpose of “Nur”. Although being established quite recently, the organization has already made regular the action on collecting material aid, foods and clothes for orphan children, entitled “Warmth of your hands”. Articles and charitable things have been brought from across Crimea and other Ukrainian regions.

It was in a voyage to deliver collected articles that the “Nur” activists get acquainted with Enver and Edem. Although being in stalemate, both boys are full of optimism and earning to be paid up in the life.  Their unbending spirit in fighting for a proper place in this society induced the activists to seek for ways to help them. This gave rise to the idea to organize “Dream-giving” auction.

Craftsmen, amateurs and even children giving readily their produce to organizers

Articles exhibited at the “Dream-giving” auction were diverse and unique, as nearly all of them were handmade. “Nur” took on to engage masters of national crafts, artists and jewelry makers, businessmen, famous TV hosts, camera men and journalists.

Amateurs, including children, were exhibiting their works as readily as the masters. The most peculiar article proved to be a craftwork in form of hare and wolf from an animated cartoon, made by Edem Edemov. When looking at this little statue, it can hardly be believed that the sculptor had to fight a physical ailment, as for the boy it was a painstaking job done with love. This article would be sold for 400 GRN.

Atmosphere of good and mercy, set up by Koranic ayahs

The incredibly bright atmosphere in the hall was created by visitors’ hearts.  Their good intentions were brought together for solving the common task by recitation of Koranic ayahs and by the words of Mr.Seyran Arifov, Master of Shariah, that good and mercy are integral qualities of a believer.

Also, the auction visitors could get acquainted with life stories of Edem and Enver through watching video clips. Yet, the purpose per se, which was to help orphans for Allah’s pleasure, had beneficial effect for all who had come as a guest of the Islamic Cultural Center that night, be it intentionally or occasionally.

Once the last article was sold, organizers summed up the auction and counted the returns. One night gave the sum of 12 890 GRN, each boy getting the half.

We pray the Most High that the effort of organizers and participants should bring greatest benefits to each of them and “Dream-giving” action should become regular.