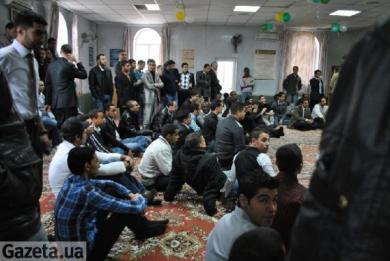 On November, 6th, Muslims celebrated the holiday of sacrifice, Kurban-Bayram. More than 300 Arabs in Vinnitsa gathered in the local mosque that is situated on the street of Matros Koshka.

They started to gather at 8am. After the two-hour prayer, "Hadzh" arranged a concert and dances. "According to the Quran, Allah ordered to the Prophet Ibrahim to sacrifice for Him his son, Ismail. Ibrahim went to the valley of Mina, on this place now there is Makkah, and started the preparation. His son who knew that his father was going to sacrifice him, did not run away. When the knife touched the body of Ismail, Allah made so that the blade was dull. He didn't want that the Prophet killed his son, but checked his fidelity and humility. To finish sacrifice, he gave to Ibrahim a ram. Therefore, for this holiday we sacrifice rams. The third part of meat we distribute to the poor", - Diya  Abusnaymir, the Palestinian who studies on the fifth year of Vinnitsa Medical University of Nikolay Pirogov, stated.

Vinnitsa Muslims got for the sacrifice 20 rams.

"We bought them from our brother, as his farm was in 50 kilometers from Vinnitsa. Rams were slaughtered on the place. However they were slaughtered according to our rules. We slaughter the animals in a scientific way, that the blood wouldn't enter meat because there are a lot of bacteria and viruses in it. It is bad for our health. It is necessary to slaughter an animal while it is still alive. Those rams were also slaughtered according to our rules. An animal should not be older than one year old, it should be healthy and have no physical defects. A victim can be not only a ram, but a camel or a cow", Diya continued.

In Vinnitsa reside more than 2000 Muslims. In general they are students of local Medical and Polytechnic universities.