Visiting the Islamic Cultural Center by pupils: a way to get introduced with people of another culture » Add new comment

Visiting the Islamic Cultural Center by pupils: a way to get introduced with people of another culture 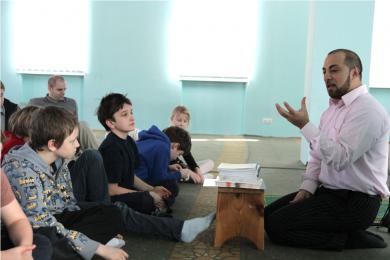 Two Islamic cultural centers of “Alraid” were visited by pupils in later half of February 2013. Visits like this offer a great opportunity for introducing children to members of a different religion or culture and to broaden their outlook. Besides that, it’s an excellent “vaccine” from xenophobia in future. Because fear of the unknown or the incomprehensible is an intrincic human feature, these children will never have blind belief in false stereotypes after talking to Muslims and getting convinced that Islam doesn’t teach hostility against followers of another faith.

It was in the last day of this winter, on February 28, 2013 that the Islamic Cultural Center in Kiev was visited by nearly two dozens of pupils from the Pechersk International School. As the children have different social and national origins, for them multiculturalism is a usual matter. Yet, school teachers continue to broaden their outlook by taking next groups of children to the Islamic Cultural Center in Kiev.

Although more than half of the children couldn’t speak either Ukrainian or Russian, this wasn’t a problem, as “Alraid” staff arranged excursion for them in English. The children and the accompanying tutors were listening with excitement a story about Islam and Muslims, about rules guiding lives of the faithful, about angels and treatment of followers of other religions and cultures. During the conversation each one could ask the question he/she concerned with, however foolish it may seem to him/her, because asking about things that one is concerned with is not foolish when there’s a person nearby capable to give an answer.

Things that impressed children most were the Bible in Arab language where the God is also called “O Allah!” and that some of the children in their age (for whom Arab is not the native language) have already learnt by heart the whole text of the Koran. And they were delighted, indeed, when offered to enjoy Oriental sweets and take away own name written in Arab letters. The latter was interesting for teachers as well.