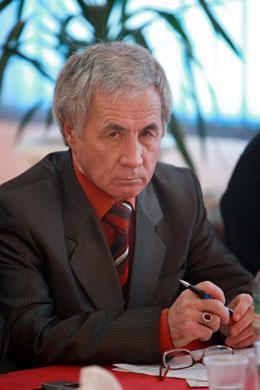 On April, 6th in the Islamic Cultural Centre of Simferopol took place the III-d all-Ukraine Scientifically-Practical Conference on the topic "Spiritually-moral education of youth: theory and practice pressing questions".

The third meeting in Crimea with the educators was initiated by the Ministry of Education and Science of the ARC, the Crimean University of Culture, Arts and Tourism, and the all-Ukraine Association of Social Organizations "Аlraid".

In the Conference participated teachers of universities of Crimea and Ukraine, representatives of leading religious faiths, public and mass-media. Among them: the Minister of Education and Science of the ARC, Vitalina Dzoz, the Minister of Culture and Arts of the ARC, Tatyana Umrihina, the acting of the chairman of the Republican Committee of the ARC on affairs of religions, Ayder Bulatov, doctor of philology, professor, the rector of the Crimean university of Culture, Arts and Tourism, Oleg Gabrielan, the representative of the Simferopol and Crimean diocese, Ivan Drozdov, the assistant to the Mufti of Crimea – the representative of the Religious Administration of Muslims of Crimea, Ayder Ismailov, the chairman of the AUASO "Alraid" in Simferopol, Ali Mohamed Taha, teachers of the Taurian National University, the Crimean Law Institute of the Odessa State University of Internal Affairs of Ukraine.

The participants of the conference discussed problems and prospects of spiritually-moral education of youth in educational institutions, moral education in a family, harmonious relation with the world, surrounding people; patriotic education.

As the conducting of the conference, Professor Oleg Gabrielan noted, it is youth who should build our future, and this future depends on their education.

In her greeting, the Minister of Education and Science of ARC, Vitalina Dzoz, wished all the present to put more efforts into the process of education of our generation as spiritually-moral, educated and decent.

The Minister of Culture and Art of the ARC, Tatyana Umrihina, noticed that while bringing up our youth as spiritually-moral people, we support culture of the people of our Peninsula.

In the opinion of Marina Gurenko-Vaytsman, the doctor of law, professor, the manager of the chair of the Theory and History of the State and Law of the Crimean Law Institute, "in the modern Ukrainian society relation to tolerance is perceived ambiguily as the multilateral process. This is diversity of regulations on how different people live. Tolerance between different generations, between different national, religious, ethnic groups, between the conflicting parties".

At the same time, Lydia Dzherbinova, the senior lecturer of the chair of German philology of the CIPU, mentioned an issue of influence of mass-media on youth education. In her report she gave the short analysis of the process of historical development of mass media, transfer of information and values of culture; in which course their influence on youth, spiritually-moral education for the purpose of stability and mutual understanding formation is traced. "The modern youth which should live during the epoch of new technologies, - as she said, are not only consumers making a choice among consumer goods, but also participants of political, social and cultural community in which spiritually-moral education, formation of opinion and valuable structures directly depends on mass-media". That "not to transform the person into a techniques appendage, it is necessary to develop creative individuality of the young man".

Gulie Abibullaeva, the lecturer of the chair of pedagogic of the CIPU considers that necessity of the decision of available problems demanded search of new approaches to education of the person. "The problem gets a special urgency in conditions of poly-culturalism, - emphasized Gulie Serverovna, - Where the society dictates a pressing need in the statement of cultural pluralism by means of poly-cultural education". She stated the most accurate opinion concerning students of elementary schools who should "identify themselves simultaneously in three ways: as a member of this or that ethnos, the carrier of national culture; the citizen of the multinational country and as just a man, a European, a person of the World". And only on this basis, in her opinion, it is possible to teach children understanding and tolerance concerning people of other race, other ethnos, other religion, other social status and other faith. In her performance she referred to the theories based on the culturological approach to education, developed by Е.В. Bondarevsky, and also considers that only change of an operating mode of consciousness of the student, is a basis of a human behavior, "therefore the object of influence of the teacher and parents should be not so much the fact of behavior of the child, but his consciousness and treatment of the event and to his own behavior".

According to the majority of the present, from the governments is needed an accurate position concerning the control over mass-media and communications, and concerning optimum use of their potential for education of the high-grade young generation capable adequately to meet a call of the future, to preserve peace and calmness in our native Crimea.

Participants of the conference were greeted by the chairman of the AUASO "Alraid", Mohamed Taha, who reminded a well-known sayings of the Prophet Muhammad (peace and blessings be upon him), "Best of you who has the best manners".

The reports which sounded at the conference were interesting and informative, read in Ukrainian and Russian, what testified to tolerant atmosphere among the present.

In the accepted resolution participants unanimously noticed that the future depends on moral orientation of rising generation, their knowledge and practical skills of Crimea and Ukraine as a whole. Following the results of the conference, the edition of the collection of scientific reports is provided.