The round table in Simferopol: Ukraine, Russian Federation, France and the USA as a home for many Muslims. 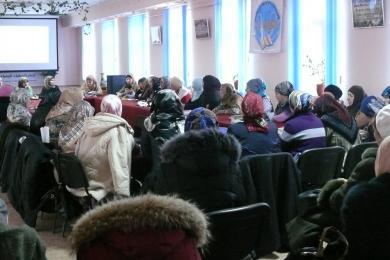 The round table in Simferopol: Ukraine, Russian Federation, France and the USA as a home for many Muslims.

Within doors of Crimean ASOO “Alraid” branch office in Simferopol the round table “ Islam in the world” took place on February 16th 2013 the initiator of which was the women’s social organization “Al-Nur”. Student’s of ASOO “Alraid” Sunday school, teachers of secondary schools, students of Crimean colleges and active youth of the peninsula.

Before the reporters’ speeches the participants were offered to think about the issues: What is Islam? Why there are false stereotypes about this religion and how to overcome them?

The answers to these questions were discussed in the second part of the seminar based on the information provided by the reporters. All participants agreed that Islam in point of fact is the fastest growing religion of the world. Each of us, showing the Islamic way of life and values in our behavior may contribute to its strengthening. For who knows – may just your seemingly insignificant action will change a life of many people for the better, making them change their point of view about the followers of Islam.

Islam in the USA

At the beginning they discussed the example of the USA Muslim community and this group of followers is enough numerous and permanently continues to grow. Accordingly, there is a development of so-called “Islamic infrastructure”: the increasing number of the mosques (now there are about 1500 of them in the country) and Muslim schools (about 550 of them), that recently gained a big popularity in the USA.

Contrary to the popular stereotype, United States Muslims – are not only “migrants living on grants”. According to surveys conducted by Pew Research Center for the people and the press only 10% of American Muslims have low income level, 52% of them belong to the middle class, 28% consider themselves as rich people.

Due to the high social status the Muslim community in the USA has the significant impact on the political and social life in such states as New York, California, New Jersey, Washington D.C., Illinois, Massachusetts and Ohio.

Nowadays there are about 5 millions of Muslims residing in France  what makes them to be the largest community of followers of Islam in the Western Europe . Day by day the number of converted French is increasing, despite the difficulties they face.

Also there’s been recently observed such phenomenon as the visible “presence” of Islam in France distinguishing especially for the last two decades. It’s been the result not because of the increasing number of immigrants but by reason of the changes  occurred in the social and cultural image of Muslim diasporas of the country and a number of both internal and external factors affecting on them. The Prophet (Peace be upon him) said that each Muslim – is a missioner of Islam for people of other faiths and their impression about Islam depends substantially on him.  Evidently French ummah began to realize deeply such statement.

Islam in the Russian Federation

In the Russian Federation Islam takes place as a second most numerous religion  (after Orthodox Christianity). Different surveys show that there are from 20 to 25 millions of Muslims residing in Russia, and this number should increase according to an estimation of demographers and political scientists.

Such statement is supported by some objective factors: natural increase of Muslim population, migration processes, better understanding of their religion of so-called “ethnic Muslims” conversion to Islam of many ethnic Russians.

Majority of Muslims in Ukraine living on the Crimean Peninsula substantially was viewed as the example of Ukrainian Muslim community.

Ukraine is a native land for some Muslim nations and differs from other European countries where Islam is considered to be the normal and usual thing. For example there are people from 26 Turkic nations that traditionally worship Islam which  affected on life and the formation of such autochthonous nation as the Crimean Tatars Islam was a reason of that Tatars of Volga maintained their ethnos in the XIX — XX centuries.

Even geographical position of Ukraine allows to have an active interaction with Muslim nations for more than thousand years. But despite this, it is not easy to  determine when Ukrainians were acknowledged about this religion for the relationships among indigenous people of Ukraine had been building ambiguously.

At a time when the Ukrainians and Crimean Tatars fought each other Islam was seen as a hostile ideology. But when the same nations fought against the common enemies, they both realized that their lives are based on the similar values. And at the same time the Ukrainians were always tolerant toward religious preferences of other nations.

Now we have similar process when deported Crimean Tatars came back to their homeland; “ethnic Muslims’ are going back to their religious roots.  As a result the ethnic Ukrainians in everyday life more and more interact with Muslims what leads to understanding, that our citizens with foreign roots are the same people with their own joy and sorrow.

Activism of Muslim Social Associations in their locations shows all beauty of Islam to all people and it leads to the fact that many of ethnic Ukrainians and Russians become the adherents of this religion.