“February 23: a day of mourning for Crimea”: flash mob in memory of Noman Chelebijihan 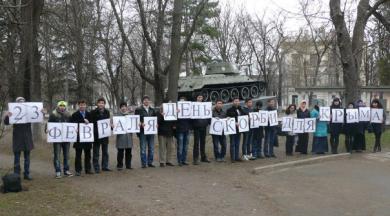 “February 23: a day of mourning for Crimea”

It was on February 23, 2013 that the activists of the Public Organization “Emel” organized a flash mob arranged for the 95th anniversary since the day of tragic death of Mr. Noman Chelebijihan, chairman of the first government of the Crimean People’s Republic (CPR), organizer of Crimean Kurultay, Mufti of Muslims from Crimea, Belarus, Lithuania and Poland.

The participants gathered at about 11.00 a.m. in Simferopol, at the crossroad of Puskin and Marx streets. The flash mob began with the collective recitation of worlds from “Ant etkenmen”, the anthem of Crimean Tatar people.

After that, as soon as the words of this outstanding religious, political and cultural activist of the Crimean peninsula were pronounced (“Crimean nations constitute a beautiful bunch, and each nation needs equal rights and conditions, because we are to move ahead side by side”), activists, each one with a sheet of paper with one letter, lined up in a chain, making up the phrase: “February 23: a day of mourning for Crimea”.

It is not an extravagance, as Mr. Noman Chelebijihan was fighting for the good of all nations living in the Crimean peninsula. So, February 23 is indeed the day of mourning for not only Crimean Tatars but for all the Crimean residents.

I Kurultay of Crimean Tatar People

I Kurultay of Crimean Tatar People, arranged by Mr. Noman Chelebijihan and his companions, took place on November 1917 (according to the old Russian calendar). He was member of the Commission on Elaboration of the Draft Constitution of the CPR. The Kurultay approved the draft of constitution submitted by the Commission, proclaimed CPR establishment and elected Mr. Noman Chelebijihan as Chairman of National Government and Head of Department for Justice.

The communication of newly created government, printed in the newspapers “Millet” and “Voice of Tatars”, said: “Crimean Tatar National Government has to ensure happiness and normal daily life and functions for not only the indigenous people, but to protect all the countrymen, all the peninsula residents from usurpation, anarchy and mutiny, to protect their life and honor, and it [government] considers this as its sacred duty”.

Building up a copy of civilized Switzerland on this beautiful peninsula

Mr. Noman Chelebijihan advocated equal rights for all the people living in Crimea. He said in his political speech at opening the Kurultay: “Varicolored roses, lilies and tulips grow across the Crimean peninsula. Each of these graceful flowers has its peculiar beauty and delicate flavor. These roses, these flowers are peoples living in Crimea: Tatars, Armenians, Jews, Germans and others. The goal of the Kurultay is to pick them up and make a beautiful and elegant bunch, and to establish a copy of civilized Switzerland on this beautiful Crimean peninsula. The Kurultay cares about Crimean Tatars, but also about all the people living near them in brotherhood for centuries. The Kurultay invites them to work together, and it will move ahead with them side by side. In doing this, Crimean Tatars will take on the role of an initiator, an undertaker, but not a supervisor”.

However, Bolsheviks taking power after the October revolution did not recognize the Crimean Tatar Government. Crimean peninsula was seized with the assistance coming from the Black See Navy. Mr. Noman Chelebijihan was a victim of Bolshevik terror in Crimea. He was arrested on January 26, 1918, and on February 23 in that year he was brutally killed by seamen in the city of Sevastopol, his body being thrown into the Black See.