120 Crimean preachers discussing the role of Imam in social renaissance 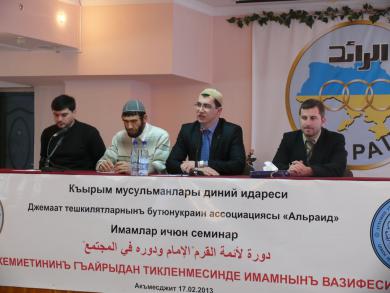 On Sunday, February 17, the next one in the series of already traditional seminars for Crimean imams was held by the Crimean branch of “Alraid” jointly with the Religious Administration of Muslims of Crimea (RAMC). It could get together more than 120 members of Muslim communities from various Crimean areas.

These seminars are organized by “Alraid” jointly with the RAMC twice a year. Their main objective is to enhance the religious competence of local imams and supply them with pieces of related useful information about selected issues of Islam.

The broad subject for discussion was “Role of imam in social renaissance”. Mr. Aider Ismailov, deputy-mufti of the RAMC, delivered a lecture about lessons of Hijra and its significance in Islamic history and Muslim ummah.

The lecture of Sheikh Seitkadr Ibrahimov about conditions for Friday prayer drew special interest from the audience and raised the largest number of questions. For Crimea where mosques in Friday gather quite a lot of Muslims, this theme is especially important, and that is the reason why it provoked great many questions.

After the break for the noon prayer, the seminar program was continued with the speech of Mr. Muslim Dervishev, head of the public relations department at the Crimean branch of “Alraid”, devoted to significance and importance of time in the life of imam.

He said: “Time has great significance indeed in the life of each person. Yet, for imams as religious leaders of their communities, rational use of time acquires special importance”.

As early as the next Sunday (February, 24) “Alraid” jointly with the RAMC plans organization of the second analogous seminar for Crimean imams.