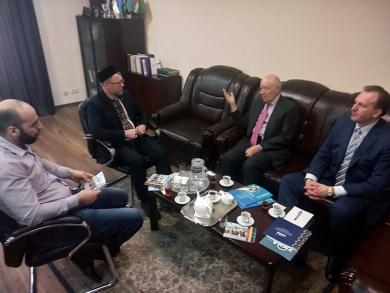 Mr.Koval spoke about the advantages of NTUU “KPI”, having stressed both the high quality of education and respect for the student’s religious needs. He stressed that both Ukrainian and international Muslims students  were free to attend Friday prayers, for that is taken into account when making study schedules.

Professor Koval approached AUASA “Alraid” knowing that the Association’s ICCs were frequented by many young Muslims of student age, both Ukrainians and foreigners, who were considering their further schooling prospects. He assures that at NTUU “KPI”, Muslims students would find both high quality education and understanding of their religious needs from the administration.

National Technical University of Ukraine “Ihor Sikorsky Kyiv Polytechnic Institute” has been listed as  #1 University in “Top-200 Ukraine” for three previous years in a row. They also improved their position in International ratings, such as QS World University Rankings (500-550 rate instead of previous 551-600); Uni Rank and Transparent Ranking also list NTTU “KPI” as the best Ukrainian University.

The University has 42 major courses, with 134 curriculums; the overall number of subjects taught is approximately 6500.