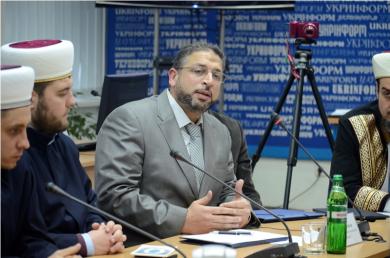 06.12.2016 / 2011
This is a view, expressed by the representative of the Department for Nationalities and Religions at the Ministry of Culture of Ukraine at the signing ceremony of the Charter of Muslims of Ukraine (the full text is available through the link). The ceremony was held at the news agency "Ukrinform" on 5 December.
"The unity of Muslims of Ukraine, based on Ukrainian identity and Ukrainian idea, is quite a positive fact. So I believe that the Charter of Muslims of Ukraine will become a factor that will encourage other religions and denominations to show their unity for the sake of our country", — said the official.
The document was signed by the representatives of WO "Maryam", HRO "Together with the law", “Alraid” Halal Research and Certification Centre that are belong to the AUASO "Alraid".
Sheikh Seyran Aryfov also signed the Charter of the "Alraid", considering that to be an outstanding event:

"Such initiatives have been already held in Europe, and now we are signing similar document in our country. Of course, it is imperfect. Perhaps somebody still has some comments on its text. But we will be able to gather a little later again in order to clarify concrete wordings."

"We have many challenges: occupation, extremism and attempts of some ultra rightist forces to blow up Islamophobia. Of course, this document cannot meet all the challenges, and solve all the problems. But we believe that it is a step towards the solution of the problems of Muslims themselves, as well as the Ukrainian society in the spheres relevant to the Muslims. It will be a platform for the further cooperation", — said Seyran Arifov, noting the signed document was the result of intensive collaboration of a number of Muslim organisations.

Charter was supported by representatives of various Muslim organisations and associations (there are 34 signatures under the document text, but everyone can join it at any time). The number of scientific institutes has provided positive expert advices on the document. In particular, Olexander Sagan, member of the department of religious studies at NAS H. S. Skovoroda Institute of Philosophy, read expert’s report, in which he mainly stated a positive fact of the appearance of a fundamentally new document, which defined the principles and approaches of the modern vision of the Muslim community of Ukraine that is living in the society with a predominantly non-Muslim population. In addition, in contrast to the known Charter, adopted in 2008 by Muslims of Europe, the Charter of Muslims of Ukraine is more concrete and less declarative document. It determines the principles of co-existence of Muslims, taking into account the specifics of living in Ukraine.

In particular, Olexander Sagan, noted the points about the recognition of cultural and ethnic diversity of representatives of various Muslim associations, the Muslim interest in the preservation and the consolidation of Ukrainian statehood; the support of oppressed fellow believers; the willingness of Muslims to live in a modern society and to defend the rights and freedoms, as well as stated constitutional obligations to the Ukrainian government.

The scientist noted that the relations between Muslim and Christian communities in Ukraine have a complex history, but they shouldn’t be confessionally engaged. We should find in our history something that unites Ukrainians, Muslims and Christians, in the difficult times of formation and development of the Ukrainian state, which would, as a civilian society, develop for the benefit of the whole Ukrainian nation.

"So, the charter is not specific confessional document. It aims to achieve social peace and harmony. It promotes the search for ways to resolve disputes between Muslim associations in Ukraine, and as well as between the Muslim community and other faiths, or in church-state relations system. [...] We should note the relevance of this document at a time when thousands of Muslims of Crimea and Donbas became displaced people. They have found themselves in the unusual for them (and for the whole Ukrainian society) conditions of internal migration. Many Muslims have even become the victims of the occupation, "— said the expert.

The expert opinion of the Centre for Islamic Studies at the National University “Ostroh Academy” was read by associate professor of this institution Mykhaylo Yakubovych. In conclusion, it is said that the document was considered to be the unique one, recording the experience of the co-existence of Muslim communities with non-Muslim secular majority population.

"In general, the states, claimed in the document, resulted from the concept of Islamic activism of XX-XXI centuries. The priority was taken to the Muslim representation in public and political life than to traditional focusing on theological and ritual matters. That allows the existence of differences between mazhabs (theological schools of Islam), which are however based on the common requirements. The recognition of cultural and ethnic diversity is significant in this prospect".

Serhii Danylov, the representative of the Centre for the Middle East Studies at the Institute of Oriental Studies, said that the Charter of Muslims of Ukraine was undoubtedly a landmark event for the religious and social life of our country.

"In order to avoid repeating our colleagues, I will focus on the challenges. As the challenges are these specific problems, facing the Ukrainian state and the Muslim community, which have led to the document’s formation, its adoption and, in the end, today's crowded meeting. We have a mix of national challenges and the specific situation inside one religious community. Muslims are an integral part of the Ukrainian political nation. Islam is one of the ancient religions of our land. This raised the question of including these pages in the publicly recognized historical narrative, "— said the expert.

Mariush Marshevskyi, professor at Poznan University, shared his thoughts on the importance of this document against the background of the processes, going on in the European Union:

"Some parties and political groups, mentioned above, use the fact that the particular part of Muslims are trying to keep aloof from the political field, considering the integration and the construction of the modern society as something that is contrary to Islam. At the same time the enemies of democracy (the authoritarian regimes and extremist groups) to a certain extent use this fact. The initiative of the Ukrainian Muslims is very important from this point of view. As, it gives us a chance to prevent those conflicts that are going on in the West and are used in turn by the enemies of the democracy. This is a great chance to integrate Muslims into the Ukrainian society and to take advantage of the huge creative power of Ukrainian Muslim communities for the benefit of the Ukrainian state, the Ukrainian society, especially in such a difficult period for Ukraine."

Gulnara Bekirova, the historian and the activist of the Crimean Tatar national movement, noted that it was literally a historical event. She thanked for this initiative, considering that as a positive step for the development of Ukraine, in particular, of Crimean Tatars and the Crimea.

Yurii Kochubei, diplomat and scholar, also expressed his opinion about the adopted document:

"It is important that Muslims have cooperated for the unity of the state, i.e. Ukraine, and they wish it the prosperity and the further development. [...]. The statements of the document should be implemented daily with our prayers and our deeds. Just talking is not enough. We must do all in order to implement the principles of the document for the benefit of Muslims of Ukraine and other Ukrainians, regardless of religion."