Women’s Role in Spreading the Culture of Peace: a Conference on Mothers’ Day 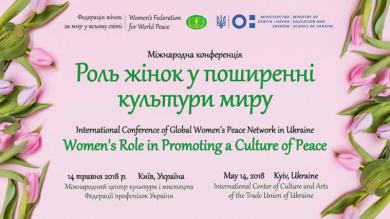 On 14 May, the International Centre of Culture and Art of Ukrainian Trade Union Federation hosted a Conference called “Women’s Role in Spreading the Culture of Peace” organized and held by Social Organisation “Women’s Federation For Global Peace” supported by the Ministry of Culture of Ukraine.

Representatives of social organisations, of the Verkhovna Rada and other State institutions, prominent artists, educators, scientists, as well as guests from Europe, Japan and South Korea took part in the event.

On the agenda were equal opportunities in public spheres for men and women in in the countries affected by wars and conflicts as one of the main issues of National and International security. The participants also spoke about increasing the involvement of women and mothers in settlement of conflicts in order to facilitate peace and stability and prevent violence against women.

Noteworthy, the Muslimahs took part in other Mother's’ Day festivities a day earlier, both at Mykhailivska Square and the City Hall.