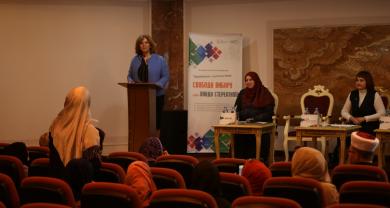 On October 16, Ukrainian Muslimahs’ League and Muslim Women's Social Organisation “Maryam” launched the All-Ukrainian conference “The Future of Society: Freedom of Choice or the Power of Stereotypes” in the Ukrainian capital. More than a hundred women - politicians, civil servants, public activists, legal experts, psychologists, and others gathered in the conference hall of the Visak Hotel to discuss the respect for human rights and freedoms in Ukraine, the compliance of laws and regulations with ethical standards , the inadmissibility of discrimination on certain grounds and ways to overcome such manifestations, the fight against negative stereotypes, as well as the consequences of physical and psychological violence in the family and society.

Among well-known people, representing not only Ukrainian but also international organisations, attended the conference were: Ukrainian deputy Olha Bohomolets, Maria Karchevych, head of the regional youth policy and support for youth initiatives office of the Youth Policy Department under the Ministry of Youth and Sports of Ukraine, UN Human Rights Monitoring Mission Representative Oleksandr Kostelev, Karima Mohamed from Charity Fund Rokada; Tetyana Lovtsova from UNHCR; Roslina Ismail from the Embassy of Malaysia in Ukraine; representative of human-rights ombudsman by the Ukrainian Parliament Andrii Hnapovskyi; Gayana Yuksel, member of the Crimean Tatar people’s Mejlis, associate professor of V.I. Vernadsky Taurida National University; Lyudmyla Tkachuk, Chief Specialist of Department of Religious Affairs and Nationalities of KOSA Office of Cultures, Nationalities and Religions; Tetyana Kaminska, rector of the Kyiv Cooperative Institute of Business and Law and Vice President of SO “Dіlovі ukrainski zhinki” (Ukrainian businesswomen); Leokadia Herasymenko, Chairman of the Women’s Union of Ukraine and representative of the Ministry of Information Policy; Tamila Tasheva, the coordinator of the public organisation "CrimeaSOS"; Anna Kulahina-Stadnychenko, senior scientific assistant of Department of Religious Studies of H. Skovoroda Institute of Philosophy; Olha Shved from SO “La Strada-Ukraine”; Melania Ischuk, Deputy Chairman of the Association of Artists and Art Workers of Ukraine, Deputy Chairman of the Kyiv Regional Office of the International Organisation “Zhіnocha hromada” and other representatives of social organisations from different regions of Ukraine as well as abroad.

The moderator of this event became Tanzilya Isa, an activist from the Ukrainian Muslimahs League.

The fact that muslimahs initiated the conference can be explained by the non-systemic and grassroots in a small way, but still demonstrations of xenophobia and Islamophobia, which they become targets of. At the state level, women professing Islam, face an unfriendly attitude on behalf of representatives of certain institutions, in particular, officials of the migration service, who deny Muslim women their right to have their pictures taken for documents without putting off their headscarf.

Sheikh Said Ismagilov, Mufti of the Religious Administration of Muslims of Ukraine “Ummah”, and Seyran Aryfov, the head of the All-Ukrainian Association “Alraid”, addressed the participants of the conference with words of greeting.

Sheikh Said expressed the hope that during this conference the problems faced by Muslim women would be voiced and their possible solutions would be discussed. He noted that Muslimahs in Ukraine were among the first in the world who had received very large civil rights and opportunities, in particular, the right to be elected to the highest state bodies, when women in Europe and America did not even have voting rights. In particular, Said Ismagilov recalled that a hundred years ago, at the First Kurultay, Muslim women had been elected to the Crimean Tatar national leadership, and together with men occupied leading positions among the Crimean Tatar people.

People’s Deputy of Ukraine, Olha Bohomolets, having thanked the organizers for the invitation on according, “an extremely important and interesting conference,” made a speech in which she spoke about honor and dignity as a reflection of the moral value of the individual.

Maria Karchevych, a head of the Regional Youth Policy and Youth Initiatives Support Office of the Youth Policy Department under the Ministry of Youth and Sports of Ukraine, emphasized the decisive role of women in the fight for civil rights and, paraphrasing the words of American human rights activist Martin Luther King: “I have a dream” with which he addressed compatriots 55 years ago, sincerely wanting his country to turn from a state of injustice into a land of dignity and freedom. She stated that at the present time all those present at the conference had a dream of peace and domination of dignity, justice, independence and freedom in our country: “We have a dream and we have the right to life, the right to freedom of choice, conscience and belief, and no one can deprive us of this right".

Maria Karchevych also talked about the fact that in modern society due to the false stereotypes and informational mud, these rights often depreciate, and wished the conference participants succeed in restoring the rights and freedoms.

The event resulted in the draft resolution, which after improvement would be sent to the highest authorities and legal institutions with a request to satisfy all the resolutions of the conference.