Warm Relief-2017 From Muslimehelfen: Every Package Handed Out! 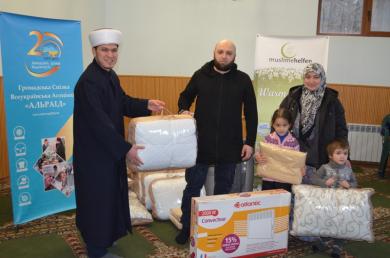 This Year, German Muslims from Muslimehelfen provided their partner organisation in Ukraine, the All-Ukrainian Association “Alraid”, with funds enough to buy 100 electric heaters and 100 warm blankets (along with pillows and laundry sets). According to Seyran Aryfov,Head of the Association, everything has already been handed out to the needy people in five cities: Kyiv, Dnipro, Kharkiv, Zaporizhzhia and Novooleksiivka.

Due to increasing number of people needing help, most of them were to choose what they needed most, either a heater or a bed set. Still, the poorest families received the full package.

The list of beneficiaries included large families, guardians of orphans and elderly people among the internally displaced persons (resettled from the occupied territories), refugees and local Muslims. Every “Alraid” Islamic Cultural Centre and member-organisation has a list of such people from among their parishioners, so they didn’t take long to define people in need for such help.

Still, according to Mr. Aryfov, during the handing out and follow-up interviews it occured that there were still people who were meeting the conditions to receiving help in terms of the project, so “Alraid” is looking forward to raising more funds to cover the needs of those people as early as possible.