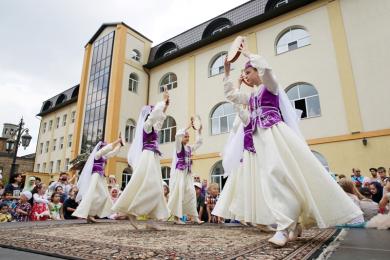 Thousands of Muslims came to “Alraid” cultural centres today to perform a joint festive prayer. While in most cities the celebrations were short, in Kyiv and Dnipto people had plenty of time to catch up during the day, and Lviv community decided to continue celebration on the following day.

Kyiv Islamic Cultural Centre is used to receiving numerous believers on festive prayers, but this morning was a record-maker, for more than 3,500 people came along. For that reason, the Centre’s yard was covered in carpets so men who couldn’t fit inside could pray outside. Perhaps such inflow of visitors can be explained by the fact that it was Sunday and most people didn’t have to excuse themselves from their jobs and studies.

After the prayer, the visitors went shopping on a handmade fair and enjoyed the photo exhibition “Alraid. 20 years”. Children had fun on the bouncy castles; everyone enjoyed a festive concert, and then a variety programme started, with its quizzes, presents, archery, strikeball, blow power measuring, armwrestling tournament, face paint, bubble show, and all that last until 4PM, so many new guests could join!

ICC in Zaporizhzhia welcomed about 400 worshipers, and as the room is small, some of them had to pray outside in the yard. After the prayer everyone enjoyed samosas, sweet buffet, compote, juice, and the little ones could win some prizes in a quiz where everyone was given a word and a present. Each woman received a souvenir magnet from Women’s Organisation “Maryam”.

Muhammad Mamutov, the Imam, noted that there have been more women and children than ever.

Meanwhile in Vinnytsia, the local ICC hosted 350 believers for the prayers, after which everyone enjoyed treats, and the children had fun with the animators. Still, the Muslims decided to limit themselves to making a feast for their own kids, and visited 50 orphans of Tulchin specialized orphanage in Vinnytsia region, bringing a gift of sweets and toys for each of them. They took off at 12 to give those kids plenty of positive emotions, bringing the animators along with them.

About a thousand Odessa Muslims chose the local “al-Masar” ICC as the place to perform their festive prayer. After the prayer, everyone enjoyed treats, while the women also had a special programme, and the kids were entertained by animators.

Festive prayer at Dnirpo Islamic Cultural Centre gathered about 400 people. The adults later enjoyed treats and greeted each other, while the kids were entertained by bouncy castles and had their faces decorated with face paint.

The fest was to continue later in the evening at the city Globa park, where Muslim communities and ethnic communities were to be given word. During the meeting that was to last from 4 to 7PM, the kids competed in reciting the Qur’an and some rhymes, were presented with interesting children’s books about Ramadan. Bounce castles and boats were also at their disposal. As for the adults, they could compete in traditional Kuresh wrestling and  karate tournament.

About 200 people came to pray at Lviv Islamic Cultural Centre, and then invited to taste the treats. The main events, however, were to be held on the following day, with pilaw, fruit, sweets for everyone, and bouncy castles, quizzes and presents for the kids. It all was held at 29a Abraham Lincoln Str from 1 to 6:PM

About a thousand believers gathered at Kharkiv Islamic Cultural Centre for the prayer. After it, bubble show and gifts were awaiting for the kids, while women could enjoy the special programme.

250 Sumy Muslims came to the local ICC to celebrate the end of Ramadan. Treats for everyone and bubble show and presents (children’s books about Ramadan and sweets) for the kids were awaiting after the prayer. Every women received a souvenir magnet from Women’s Organisation “Maryam”.