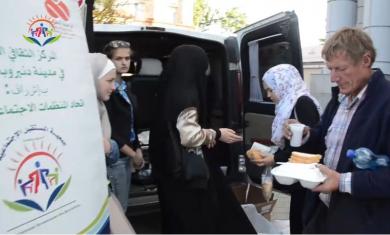 For the volunteers of Dnipro Islamic Cultural Centre, the morning of 10 May started with grocery shopping. It wasn’t a usual trip to a supermarket to refill the food stock at home, for they were buying food for needy people. After that, they went back to the ICC where other Muslim women already gathered, and in a few minutes the work was humming. The women peeled, chopped, grated, fried and boiled.

Put some garnishing, pour it with chicken sauce, add some salad, shut down the thermo-resistant container, and here we are with several large boxes of homemade meals ready to be served. For each of over 80 portions the volunteers has utensils, bread and hot tea. The meals were then delivered to Dnipro Central railway station where many poor people can be found, and distributed among them. The needy people thanked the Muslim women for their support, attention and a chance to have a hot homemade meal which was a rear occasion for those people.

Noteworthy, it wasn’t the first such benefit, for the Muslim women of Dnipro have already initiated that charity before.