For the first time, the Muslims of Dnipro and Sumy meet the Ramadan in their own ICC 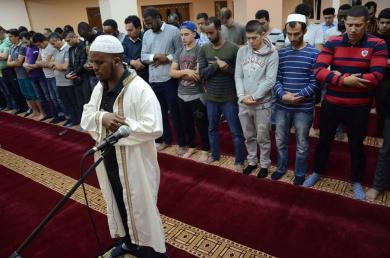 For the first time, the Muslims of Dnipro and Sumy meet the Ramadan in their own ICC

Ramadan is a period of revival of the spiritual life among Muslims. Believers spend more time in worship, put their mind to the Qur'an’s verses and signs of the Most High, attend mosque more frequently. The communities of Dnipro and Sumy are united by the fact that: it is their first Ramadan in their own Islamic Cultural Centres, where they are rightful owners. Previously, the members of those communities huddled together in small rented places, which couldn’t always comfortably seat all visitors.

We contacted imams of these centres and asked them to tell whether lives of their parishioners had changed after the opening of the ICC in their city.

Edhar Devlikamov, imam of Dnipro Islamic Cultural Centre said: "Of course, the things have changed for the better after the opening of our ICC. Now our premises are bigger and more comfortable — both praying rooms and place for ablution. With the opening of the women's hall of the mosque and Muslim women's department, the women began to attend the Centre with their husbands more often. They also bring children with them. We have the kitchen where we can cook the iftars ourselves. The people are divided into teams and prepare the food in turns for all. Some of parishioners bring money, the others — food, and we cook of it. "

The Imam noted that the number of parishioners had increased as well as their variety: "I think that with the opening of the Islamic centre, which has also a mosque, the people have more confidence in us than when we were just a religious organisation, because, people consider the mosque as something serious. As usual, about 150 people came on the Friday prayers, but now they are almost 250 that are twice as many men. If at the beginning of Ramadan, in contrast to the last 10 nights, a very few people stayed at the tarawih, now, from the very first day, about fifty Muslims have been staying, as usual.

Now the believers, that used to gather at their homes to meet their religious needs, regularly visit our mosque. The kind of our parishioners has changed too. Previously, there were mainly foreign students. They visited us until they obtained the degree and left the country. So there was the high "turnover" of visitors. Now for about 80% of parishioners are local Muslims".

Rustam Khusnutdinov, imam of Sumy Islamic Cultural Centre said: "Our centre hasn’t worked even a week since the official opening date, but even now we are seeing the revival of religious life among the Muslims of our city. People began to attend the mosque for the midday prayer, the afternoon prayer, what they practically hadn’t done formerly. More people come to the evening and night prayers. Only a few stayed for the night prayer tarawih before, but now the number is about 35 people —  it makes us happy.

Women come more often, as usual, married women with their husbands. There are a separate Women's Hall, women's section and the children's room in the mosque, so the women are able to stay for the iftar, evening, night prayers and tarawih. Muslim women bring their children. Parents do not worry about where to leave the kids and what they will do, because there is a children's room with toys and table tennis."

Imam said that people cook iftars at home and bring it to the ICC. Unfortunately, the centre’s kitchen is not unfurnished completely for cooking there. All the changes make him very glad, and he hopes that more people will get to know about the Centre little by little, and their activity will only increase.