Tryies to sweeten the bitterness of orphan childhood 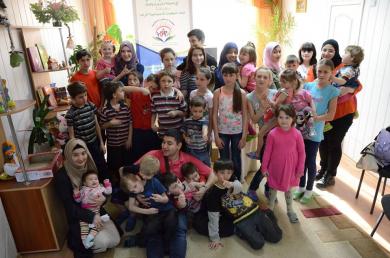 The wards of the orphanage "Barvinok" are children aged 2,5 to15, whose parents abandoned and left them in the hospital, or were deprived of parental rights

The wards of the orphanage "Barvinok" are children aged 2,5 to15, whose parents abandoned and left them in the hospital, or were deprived of parental rights. Such beginning of a little human life doesn’t look promising, does it?

The members of the social organization of the Muslim women "Blagodіya", established within Dnipropetrovsk Islamic Cultural Centre, paid a visit to these children for the first time on recommendation of the coreligionists, who had already visited them before. The women wanted to coincide their call with the World Orphans Day (the 14th of April) — but, after they had concluded that there would be many other interested persons, they decided to come a few days earlier.

The women brought fruit and sweets, toys and books, games in accordance with the age to the thirty forest children of the orphanage.

Some children were openly rejoicing at touching the tale: "Oh, you look like Hürrem, you know? It is so beautiful!" Some teens treated warily the women in full covered clothes at first, but changed their attitude during the communication.

Muslim women also found out the urgent needs of the children, and in the next visit, which will be in about a month, in addition to the food and toys, they will bring more "targeted" gifts as: clothing, daily necessities. Moreover, they arranged with the administration of that educational institution about taking a few children (accompanied by tutor) for ICC various children's activities such as: going to the circus, picnics, etc.

The Prophet Muhammad, peace be upon him, has repeatedly stressed the importance of the caring for orphans. For example, he said: "I and the guardian of an orphan will be in the Garden like these two fingers", "Who caresses the head of orphan — will receive the reward in Judgment Day, which equals each of his hair in number." The Holy Quran mentioned orphans seventeen times and the duties of believers towards them. In addition, Islam not only teaches to take care of orphans, but also warns of parents’ responsibility for their children.