Hijab is a Fancy and Appropriate Garment for All Spheres of Life: a Fashion Show in Kyiv 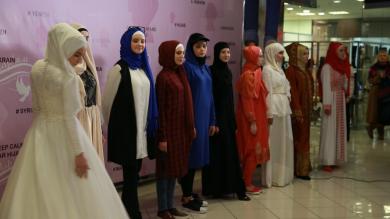 They had a really good reason to chose the OLIMPIYSKIY mall for the show, for it is a popular place for for spending time with family and friends, and that allowed to cover more audience; not only those who came on purpose, but passers-by as well. It resulted in several hundred people jam-packing one of the staircases and several aisles.

In implementing this project, the Muslim women were kindly assisted by the mall’s representatives; non-Muslim make-up artist, models and musicians; diplomatic mission of Muslim countries in Ukraine (that eagerly lended some traditional women’s clothes of their people for the show), Ukrainian fashion brand ZHURAVEL’ (that offered two full sets of women’s traditional clothing, from Kyiv and Rivne regions), and, of course, many other Muslim women and girls who attended the event, helped the models dress up and tie their headscarf appropriately (to match the costume of a certain country/region they were wearing), lended their own pieces of clothing from either their wardrobe or their collection, and also held a master-class on traditional kerchief styling in Pokuttia and Hutsulshchyna (regions of Ukraine). Muslim women also decorated the female guest’s hands with henna patterns.

After the fashion show, where they sported both traditional garments of different Muslim countries and modern clothes for different occasions (casual, sportswear, official style and even a wedding gown), all the guests were invited to have a cup of traditional Arabic coffee and oriental sweets.

The coffee was provided by “Korolevskiy Coffee” (Royal Coffee) Shop, while the sweets, the headscarves and the accessories were purchased with sponsor support of “Alraid” Association at a considerable discount granted by Islamic Clothing Store MANHADZh and Islamic Goods Store at Kyiv ICC.

By the way, everyone who wished to try on a Muslim woman look on a headscarf-tying master-classes was presented with a scarf and a full set of accessories, so they could just walk away wearing that look.

As for Gymnasium “Our Future”, themed events were held during the school hours. Even the smallest schoolgirls participated not only in various contests (of solving themed puzzles, answering questions on fiqh of hijab, and competing in different ways of headscarf styling), but in some of the preparations for that day. Speaking of contests, the headscarf styling competition with with their dolls and their non-Muslim teachers (who usually do not cover their heads) as models caused the schoolgirls’ biggest excitement.