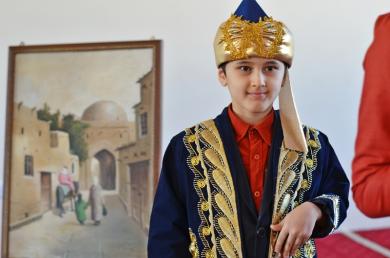 Most of the Ukrainians know very little of skullcaps, mostly the famous anecdote: “and when I stand with my hands on my hips, I don’t care yjw you put your skullcap on”. Yet those who attended the Uzbek Culture Day at Kyiv Islamic cultural Centre on February 27, can now tell that there are six main groups of historically formed groups of headdress depending on the region (Tashkent, Samarkand, Bukhara, Kashkadarya, Surkhandarya, and Khorezm). And every craftswoman enriches the traditional decorations (in Ferghana valley, for instance, it’s the traditional black-and-white contrast) with her own fantasy. The variety of colours and decorations is so great that it’s hard to classify them.

The event was held in terms of initiative by Women’s Social Organisation “Maryam” for introducing cultures of different peoples attending the ICC mosque. Earlier, they held themed events for Ukrainian, Arab, Crimean Tatar culture. Such events are attended by both Muslims and non-Muslims, for people appreciate the opportunity to discover some new culture without having to leave the territory of Ukraine and even Kyiv.

The arts and crafts survay wasn’t limited to skullcaps only, for there were plenty of the national dress, pillowcases, bolsters, curtains and prayer rugs decorated with embroidery and goldwork. And those traditional tea sets of fine china, with cotton flowers on them!

Masterpieces of Architecture all over Uzbekistan are also marvelous, and those cities are one of the world’s oldest. The slideshow, of course, is a low-luminosity image of the beauty of those places, but still even the pictures are impressing.

During the slideshow, the guests were invited to take part in a mini-quiz and recall the names of great thinkers, literary artists, scientists and doctors originating from certain Uzbek towns. The audience confidently named al-Bukhari, Abu Ali ibn Sina (Avicenna), famous Astronomer Uglubek, poet and statesman Rudaki, humanist and statesman Alisher Navoi, layer and theologist Mahmood Zamakhshari and many others.

And, of course, traditional treatment, where the delicious taste fulfilled the wealth of colour, and the aromas were teasing. The official part has been long over, while the guests continued discussing the new information over the bowl of delicious tea.