“The Other Side of the Headscarf”: Non-Muslim Opinions and Muslimahs’ Stories on Hijab Day 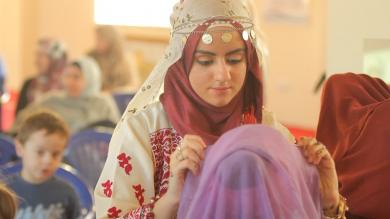 Three Ukrainian cities, Kyiv, Odessa and Sumy, celebrated the World Hijab Day last Sunday. Girls and women spoke of both what hijab means for a practicing Muslim and of traditional dress of different peoples, modern fashion, and shared their own experience of covering up in Non-Muslim society.

In Kyiv, the event started with reciting the verses of the Holy Qur’an that urged the believing women to cover up [33:59, 24:31]. But does that put limitations for women’s potential? By no means, and many Muslims demonstrate this by personal example, getting degrees in differents spheres of science, succeeding in business and in social work, holding state offices and supervising international projects. Lest making unsubstantiated statements, some of those women were shown in a presentation video.

However, outside perspective is no less interesting than inside one, so young Kyiv Muslims questioned passers-by in the capital’s downtown what their attitude towards covered up women was. To avoid long explanations what the question was about, some hijabis were nearby. It occurred that most respondents rather liked the look, and some of them even didn’t mind to see all the women in Kyiv dress like this, if this became trendy.

Besides the lectures, presentations, master-classes on styling headscarves and mehendi and a fashion show, the guests participated in a quiz where they could win nice souvenirs, and enjoy a tea party.

At Odessa ICC, the themed evening consisted of three parts. They reviewed the Shariah prescription defining general requirements for the women’s dress, discussed the latest fashion trends (for many world-famous fashion houses added styles that Muslim women could wear to their latest collections), and spoke about the traditional dress of different peoples of the world.

Muslim women, both covered up and not wearing a headscarf for different reasons, shared their personal stories on problems and obstacles they had to face and overcome in order to defend their right to dress according to their religious beliefs. Some of them were accepted and appreciated from the very beginning, and some had to go through a lot of struggle. There were also women who, being the only breadwinner for the family, chose not to risk their only job and had to leave the dreams of wearing a headscarf for the future. And some of them took a dare and had to climb the social and career ladder from the very bottom once again, taking a second job as labourers.

The new Muslims eagerly took their pictures with and without a headscarf (they learned to style the headscarf on the master-class, according to their wishes and everyday styles), for they wanted to have a detached view of themselves, “before” and “after”. And, of course, vivid chatting, quizzes and a tea party completed the evening.

In Sumy, about a quarter of the guests were non-Muslims. The faith, however, wasn’t an “entry ticket” and “ticket for a gift”, for the organisators made sure that everyone received a small present, containing a headscarf, a key fob and a brochure on hijab.

In order to explain the Islamic prescriptions for the women’s dress, the facilitators didn’t go to exotic examples of some distant countries, but took Ukrainian traditional woman’s dress in all its diversity depending on the region. And, of course, various styles of headwear were discussed as well, for one could tell a lot of information about a girl or a woman literally at first sight: her marital and social status, place of origin and residence, wealth of the family and a lot of other details.

The theory was axed with a workshop where different styling of kerchiefs and headscarved was shown, and the workshop included mehendi as an exotic element. Friendly air, chatting and delicacies of the table charmed the women so much that nobody wanted to leave. The guests left the Centre more than six hours after they came there, when it was very dark outside already.